As I mentioned in the previous post, we moved from the outskirts of Los Angeles, California to the outskirts of Philadelphia, Pennsylvania last July 2016. We had made the decision on this move without the certainty that it was even logistically, humanly possible. We decided on it believing that God is prompting us to move and in so doing, He was going to provide for and keep us. The best part of this whole deal was certainly experiencing His presence and His marvelous way of working things out. More on that later.

Logistically, it was a nightmare. We had to find the most cost-efficient way of moving across America. Just having to weed out most of the stuff from our one-bedroom starter apartment was stressful enough. Though there wasn’t much to begin with, it was still too much stuff – read my thoughts on that here. In the end, we managed to bring everything down to a small storage room that eventually got whittled down to 7 large + 3 medium moving boxes as seen below:

Still a lot. To be fair, that was almost everything we had in addition to what was left of my immediate family’s possessions in California (my mother and siblings had already moved to Pennsylvania in 2014). All the boxes got shipped by Amtrak and the rest of our things, items that were too valuable for us to risk loss or breakage, all went into our mid-sized sedan.This included a 47″ flat-screen, important papers, breakable glassware and a whole box of CD’s and records. We also had to bring trip clothes and camping gear (yes, this trip included camping!). This meant that our mid-sized sedan was packed – really packed. The back seat was so full, we had to move our seats really close to the dashboard – too close for comfort. We weren’t on a deadline. My boss was kind enough to let us pretty much take all the time we needed. But budget = schedule. We only had enough money to stay on the road for a week. Also, have you tried driving across America in a packed car? One can only endure sitting in a sedan full of valuables for so many days before going nuts.

Please forgive the differences in the photographs. Throughout the trip, we switched back and forth from our DSLR and phone cameras, whichever was handy. Of course, some images were too good to even take photos of – but are now permanently, and happily, etched in my brain. Many of our best memories tend to go that way, don’t they?

Anyway, this long introduction is just to give you an idea of the less-than-perfect conditions in which we made this over 3,500 mile, 7-day drive. It was primarily a move, not a vacation. But man, oh man, we had such a blast! God is so good! America is so beautiful! My husband is so amazing and drove 95% of the time! All the  disclaimers from the previous paragraph included, it was a pretty incredible trip and I wouldn’t have traded it for anything less, let’s say, adventurous.

We left the San Fernando Valley a little past midnight to make our first stop at Las Vegas, NV by sunrise. It being so close to LA, we had been to Vegas multiple times but neither one of us had seen the infamous sign up close. We figured this might be the last time we’ll ever need to be in LV. Here’s a GIF for your enjoyment:

Look at us after our first four hours on the road – so fresh, so excited, so clean. Ha!

The sign was our only stop in Las Vegas as we were in a hurry to get to Utah to get a camping spot at Zion National Park.

We had agreed on making plans for our trip (for my sanity) but leaving some room for spontaneity (for Miguel’s enjoyment). Part of this half-planned, half-spontaneous thing we got going was picking our stops for each night but not making (non-refundable) reservations if we can help it. Besides, in a park as popular at Zion, reserved campsites fill up months ahead of time. This means we had to get a first-come, first-serve site and had to get to the park early. 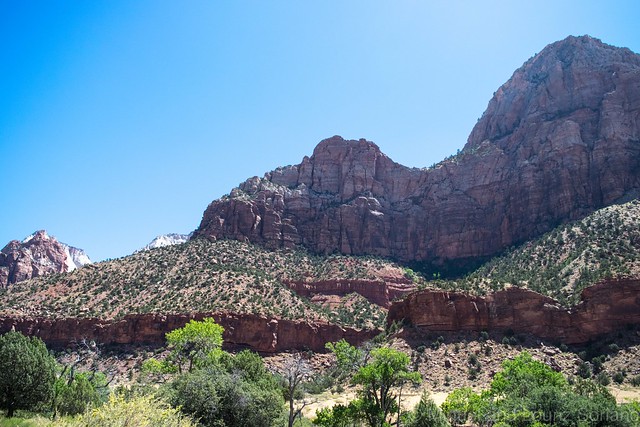 We got to Zion’s South Campground at 10AM and snagged one of the few remaining spots. We got to the site, set-up camp and headed out again. 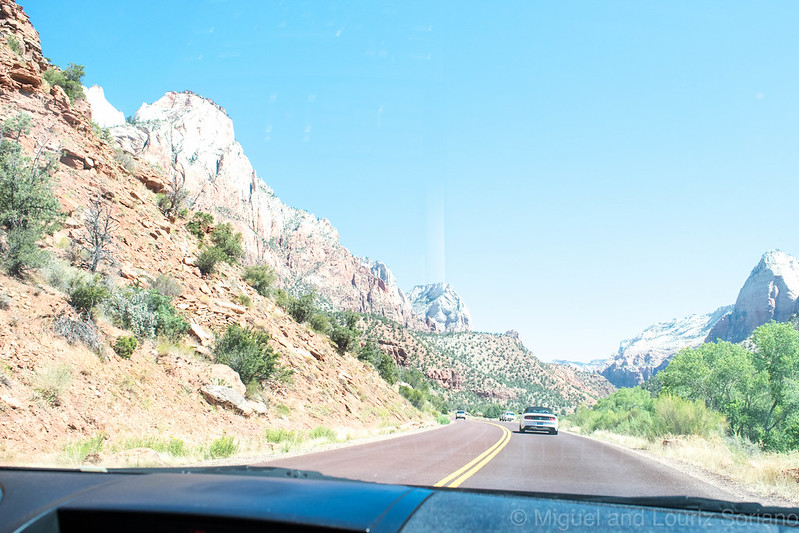 Outside the eastern entrance to Zion, we stopped for a delicious lunch at the Cordwood Restaurant in Zion Mountain Ranch. 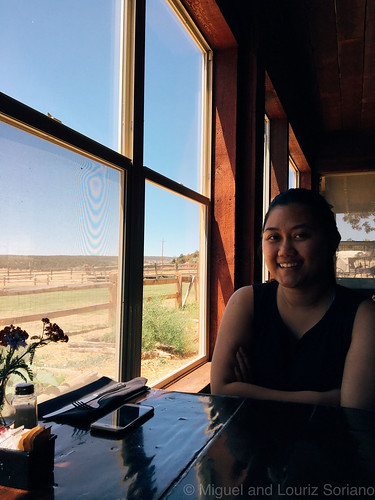 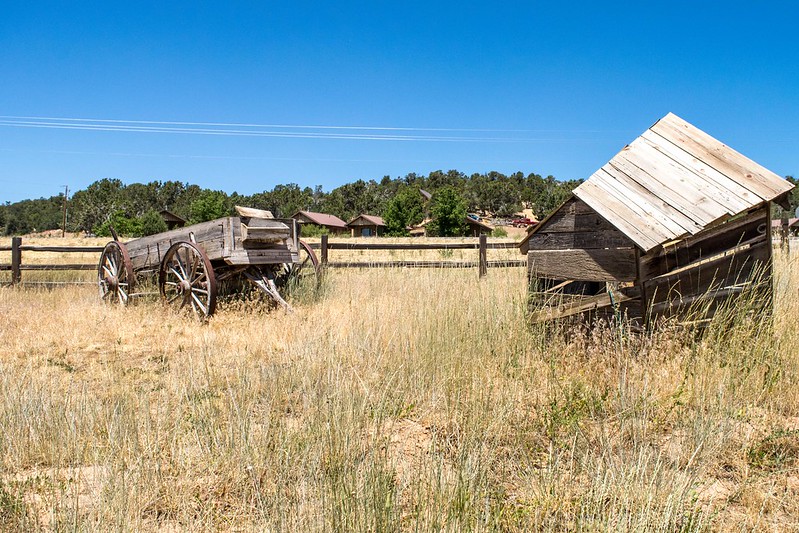 After lunch, we drove to Bryce Canyon National Park. 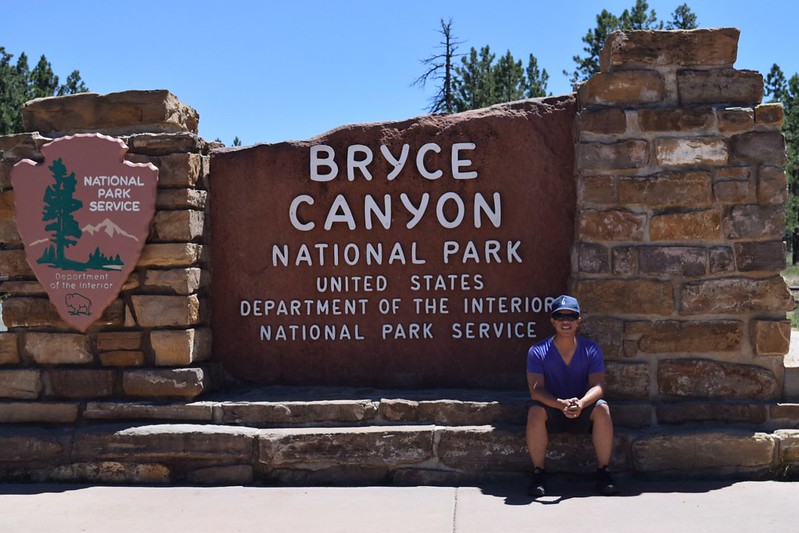 We took more time getting to Bryce than actually being there, but it was so worth it. I had been to Bryce before and it is my personal favorite. I just had to get Miguel to see it. 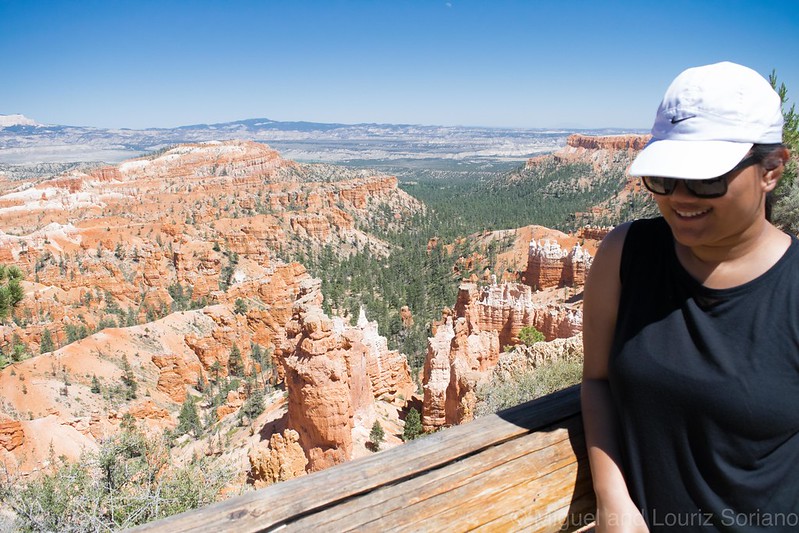 It is just stunning. It’s still one of my favorite spots – anywhere. For some reason, those hoodoos (the columns of rock) remind me of silver dollar pancakes or cinnamon-dusted crepes. Perhaps it is this association with something sweet that forever makes this a happy place for me. Yum! 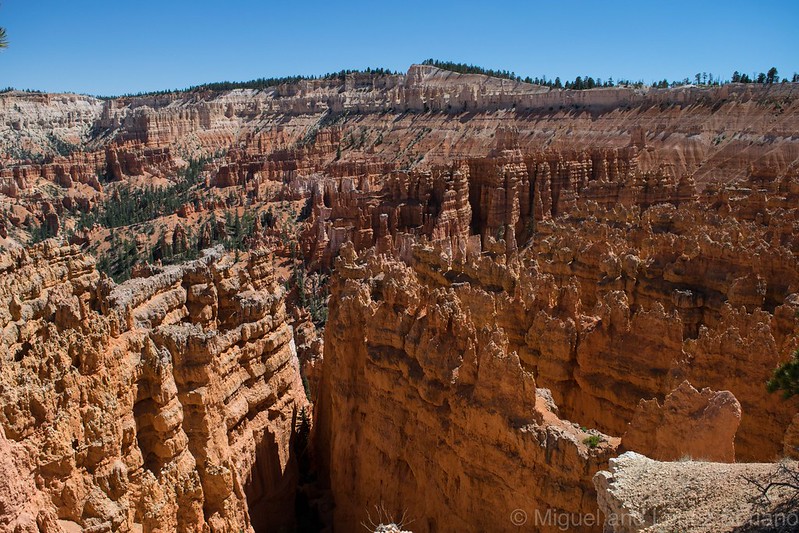 We almost didn’t go to Bryce as it was out of the way. Miguel was hesitant to drive even more than he already had to. I had to pull a sad puppy-dog face to convince him to take the drive. But the moment we got to the overlook, he 100% agreed it was worth every additional mile. 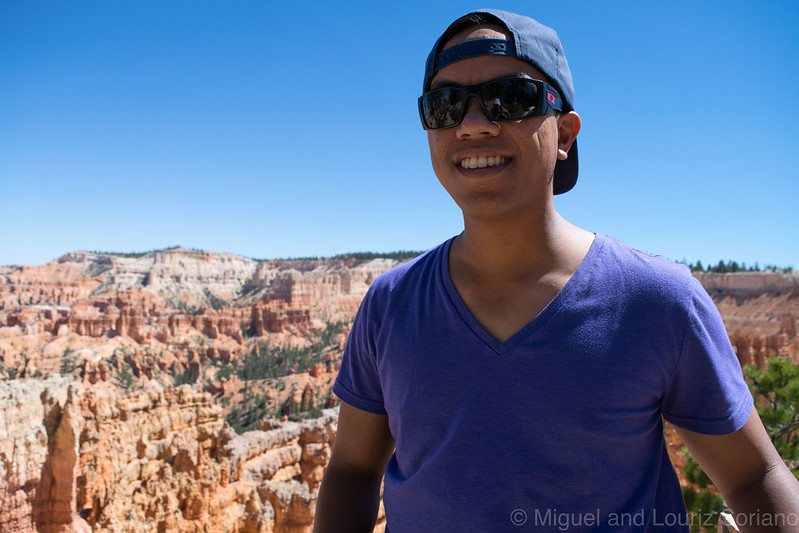 After a peek (I wish it was more) at Bryce, we headed back to Zion. 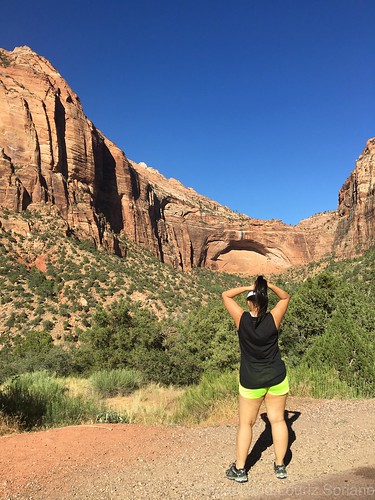 Zion was gorgeous too. Anyone who has been there will tell you Utah got a pretty good hand. Seriously, too good. 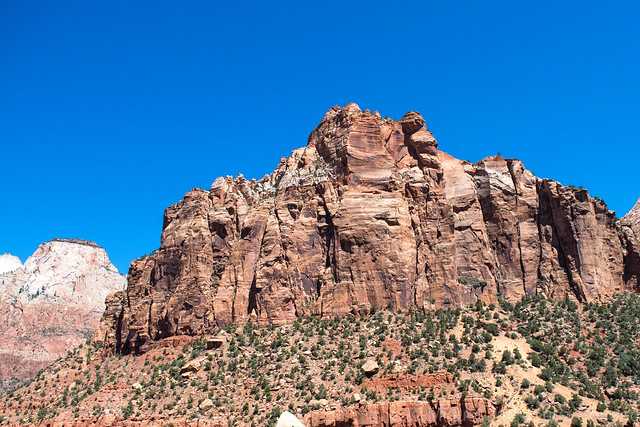 South Campground is next to the Virgin River. Let me tell you, that river looked so inviting to our hot and sweaty and sticky selves. It just beckoned to us and we couldn’t resist jumping right in. Got to live a little right? 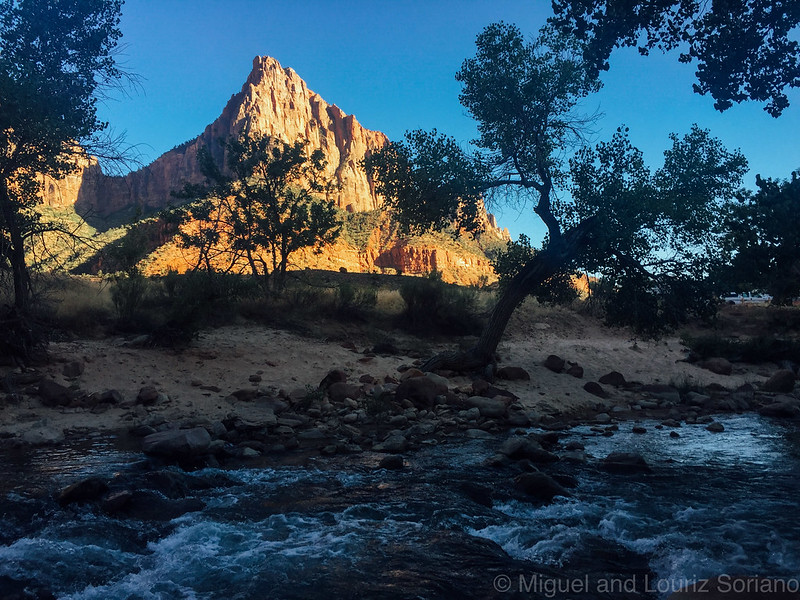 That running water was cool and refreshing and after a long day of cramped driving, it felt like a resort. Plus it’s hard to beat that view. 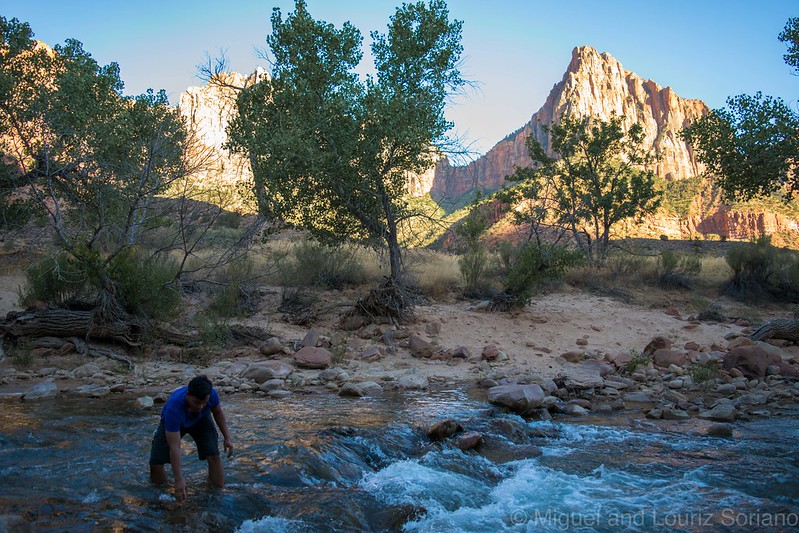 If you’re curious to know how much are the entrance fees for every park, it’s $30 for each private car, valid for 7 days. To save money and to make getting in and out of the parks easier, we got an Annual Pass (2016 The America the Beautiful-The National Parks and Federal Recreational Lands Pass) for $80. This provides one-year access to 2,000 parks and recreation areas managed by the The Forest Service, the National Park Service, Fish and Wildlife Service, Bureau of Land Management, Bureau of Reclamation, and US Army Corp of Engineers. For this road trip, we used it for 3 different parks that regularly charged $30 in entrance fees each so we came away from this trip with our Annual Pass already saving us money.

To camp at Zion’s South Campground cost us $20 for a night and was not included in the Annual Pass. 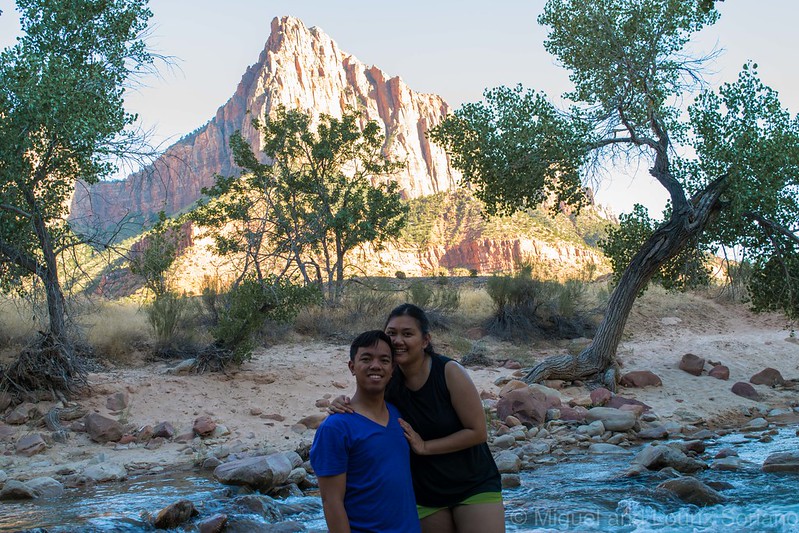 If you didn’t know already, 2016 is the 100th Anniversary of the U.S. National Park Service. There’s great work and love that goes into preserving these beautiful places. I am glad for all the people whose hard work and dedication allows us to marvel at God’s wonderful creation with ease and enjoyment. Thank you NPS!

This is going to take me forever to get through. ‘Till Day 2, friends!

More posts on this trip coming up. We haven’t even made it out of the wild west!