This is the fifth in a series of posts chronicling our one-week, 3,500+ mile cross-country road trip last July 2016, when we moved from the outskirts of Los Angeles, California to a town around 40 miles outside of Philadelphia, Pennsylvania. Catch up on Day 1, Day 2, Day 3 and Day 4. We’re almost done! Here’s Day 5:

We wake up early in the morning, in a motel in the middle of Kansas. We quickly pack up and get back on the road, determined to let the Wheat State redeem itself. We head to the Flint Hills to visit Tallgrass Prairie National Reserve near Strong City. 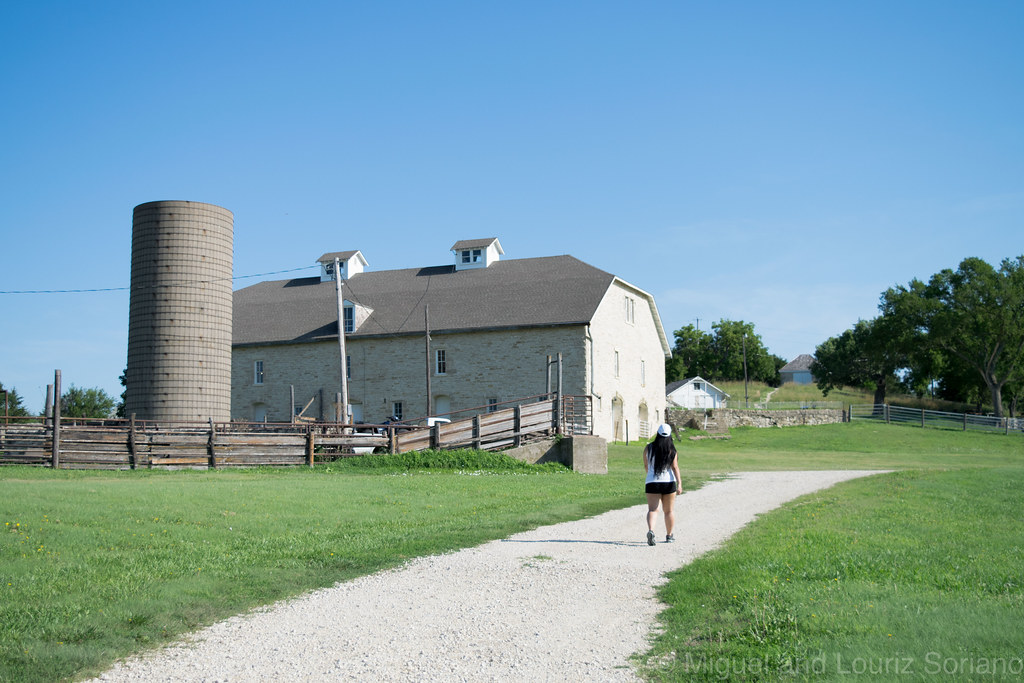 As the name suggests, this place preserves 11,000 acres of tallgrass prairie land that used to cover 170 million acres of North America, now down to 4% of its original spread due to human development.

Most prairie lands were plowed down. However, the Flint Hills’ geology was not good for plowing but great for pasture. We were told by the park rangers that cattle love the grass here and simply speaking, the cows preference for it saved this particular stretch of prairie from being turned into farmland. 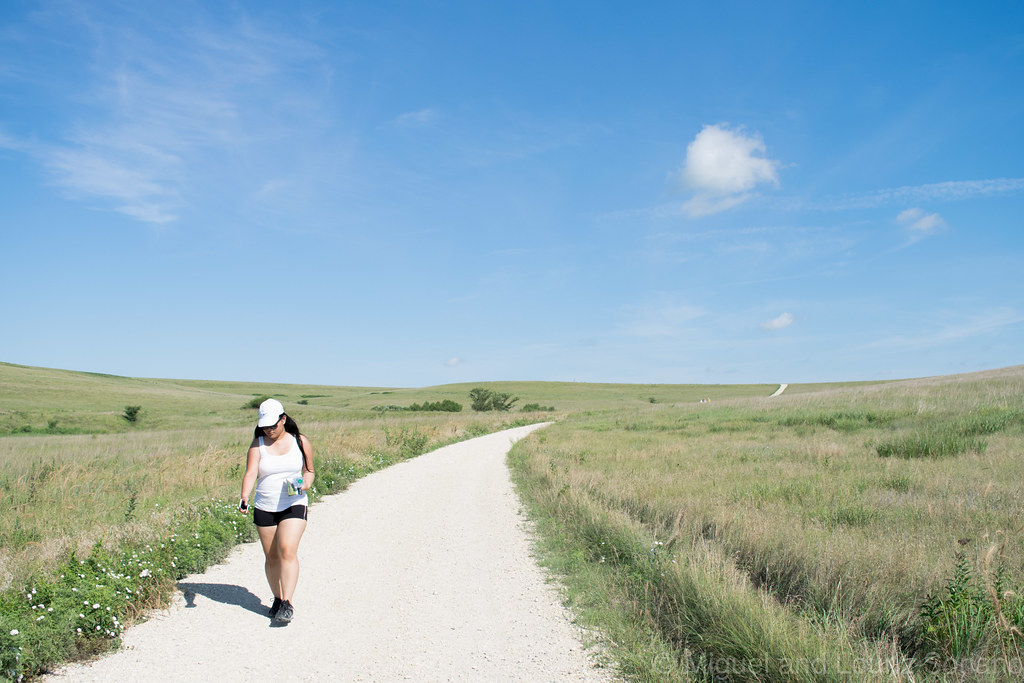 When we visited, the tallgrass was not “tall”. The height comes in the fall. But it was still beautiful. If you are patient and/or have good timing, you can encounter the preserve’s herd of bison from within a hundred or so yards (The bison’s charging speed make it inadvisable to come any closer). We saw the bison herd from only a far-off distance, sadly. By the time we got closer, they’ve moved on. 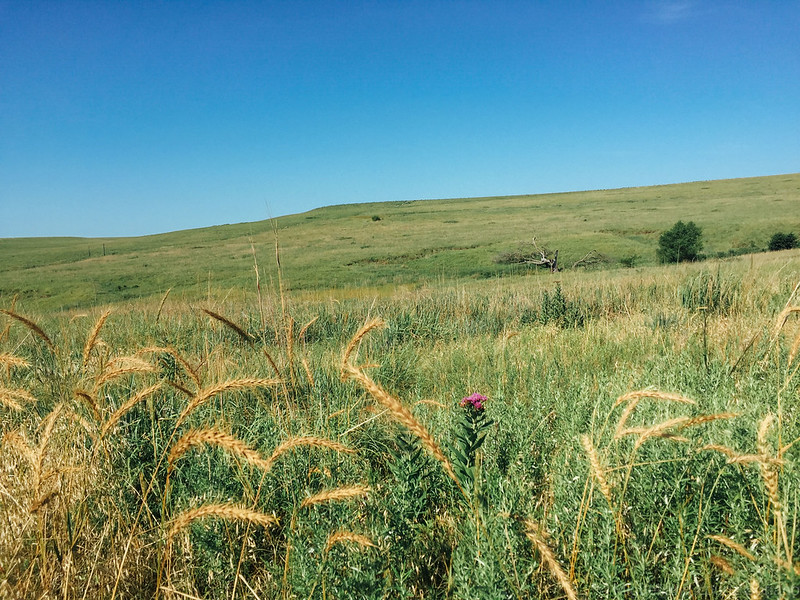 We did get to visit the 1881 Spring Hill Ranch farmhouse located on the preserve. As there were no other visitors when we visited, we got the tour guide and the house to ourselves for a full 45 minutes. Miguel and I are educational-tourists kind of people. I, in particular, am that person who has questions about everything (nerd alert!). But my introverted self is usually too shy to speak up in a crowd of strangers. So you can imagine how much we appreciated getting the tour guide to ourselves. 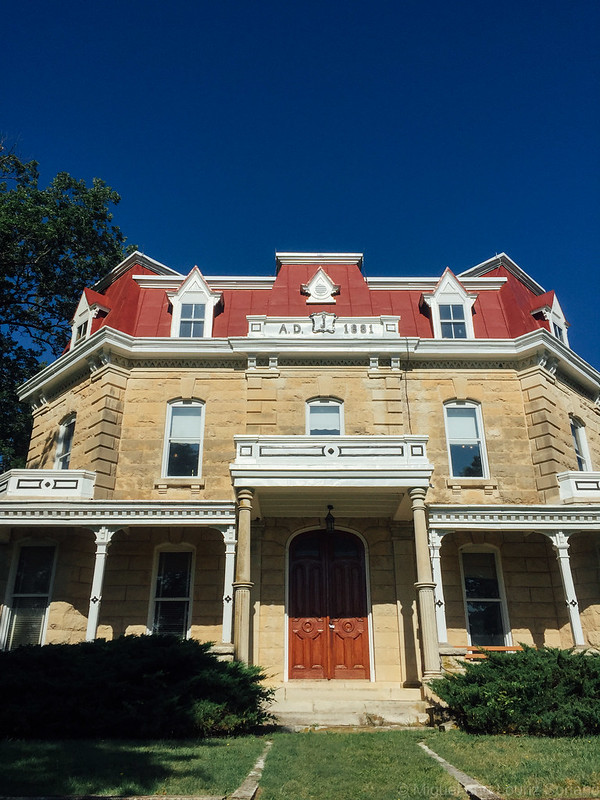 The mansion is built out of local hand-cut limestone. Even the outpost that housed the 1880’s toilet. Very fancy. Very imposing and impressive. Remember, this was during the wild west / cowboy era.  Because this is tornado country, they had a storm shelter built into the hill upon which the house is built as below: 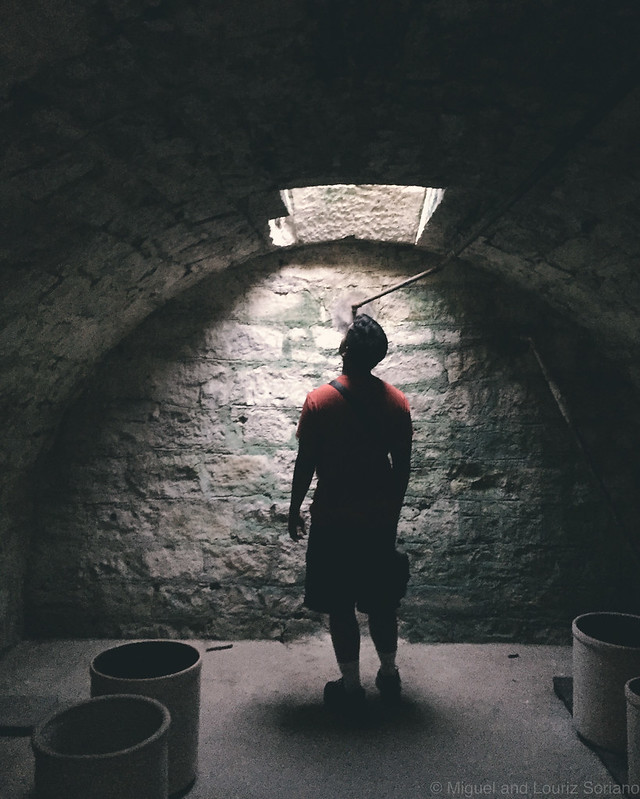 The prairie behind the mansion was beautiful. You’d think it would be boring but it wasn’t. Kudos to the The Central State. I wouldn’t mind living in the middle of America, if it all looked like this. 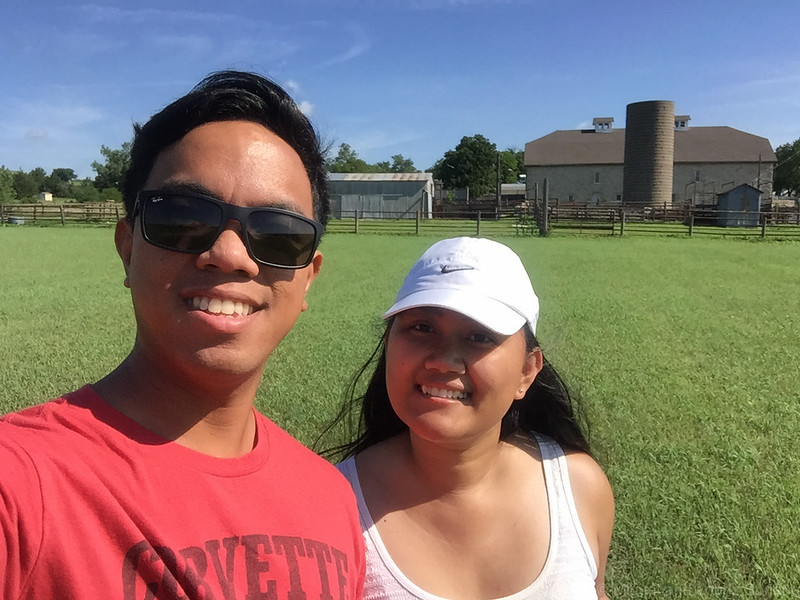 After a short hike through the grass, we were back in the car and headed to Topeka for lunch. Before our meal, we stopped by Topeka’s Brown v. Board of Education National Historic Site at what was formerly Monroe Elementary School, an elementary school allotted for black children only. It was a highly educational and moving visit. I imagine it elicits different reactions from different people. It really tugs at your heart. All I can say is – there are facts that hurt but cannot be denied. A visit to this site is definitely worth your while. 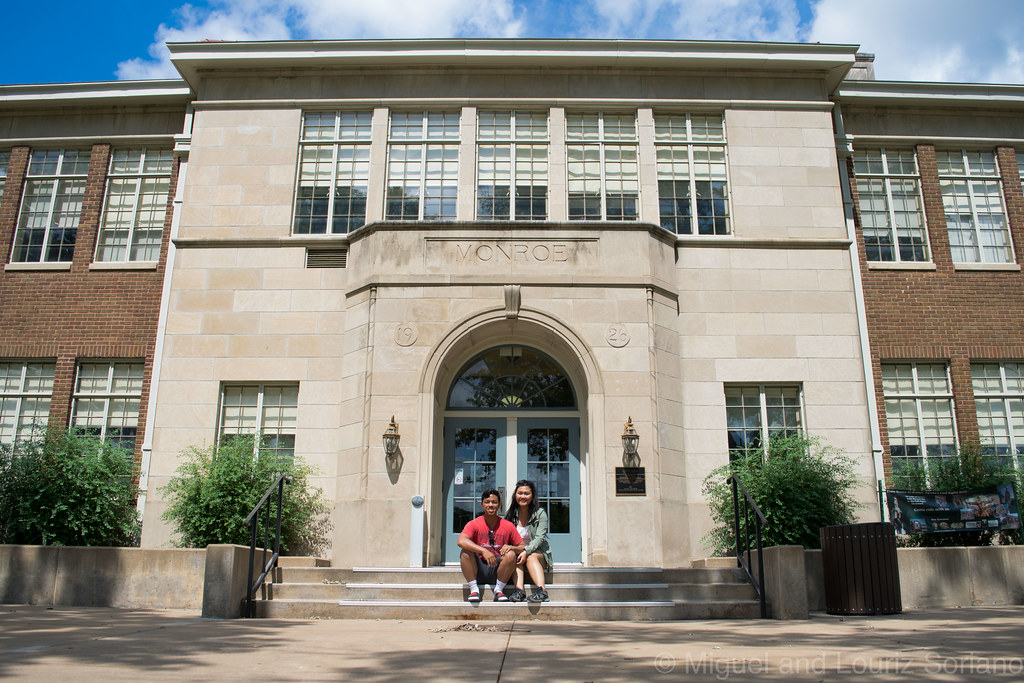 We spent a good hour inside the museum to take in as much as we can. Afterwards was lunch at The Wheel Barrel in North Topeka’s Arts District. We got delicious grilled cheese sandwiches and great service. 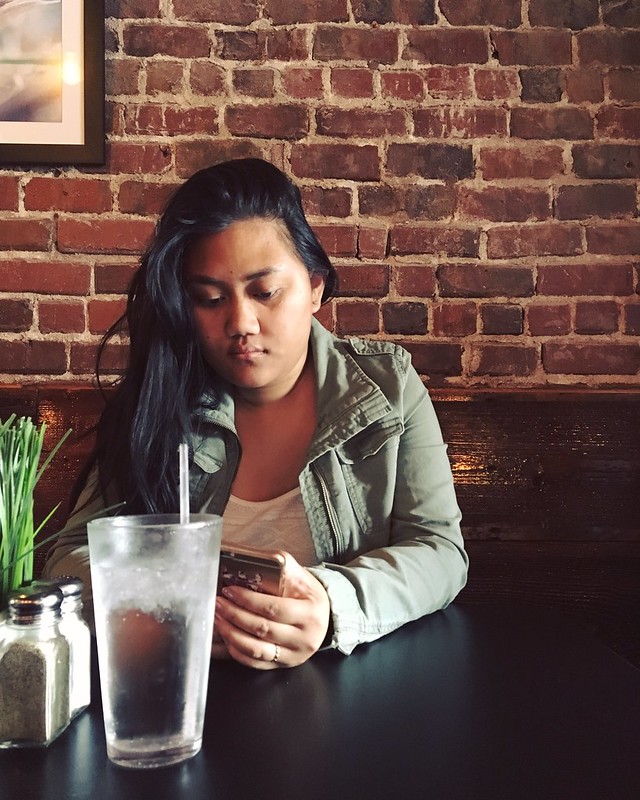 As you can see in the above photo that I am starting to look worn out. 5 days on the road in a tiny car will do that to you. 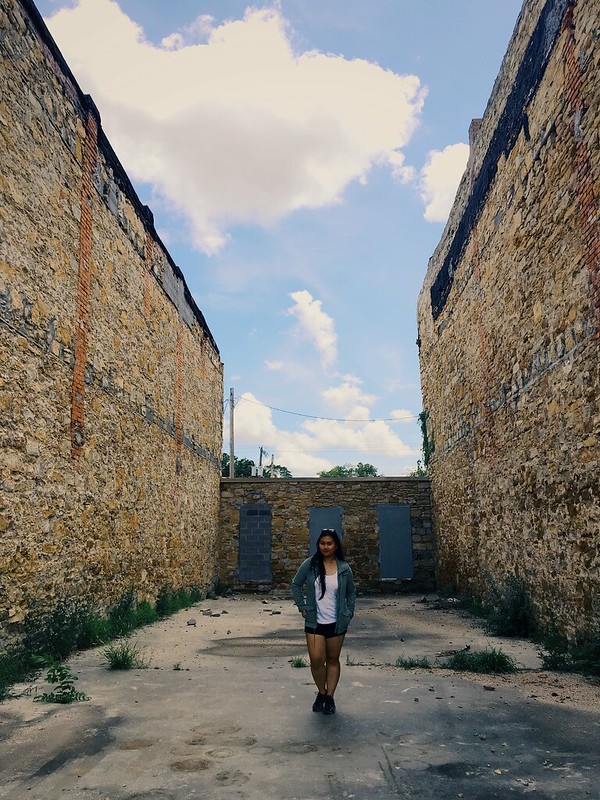 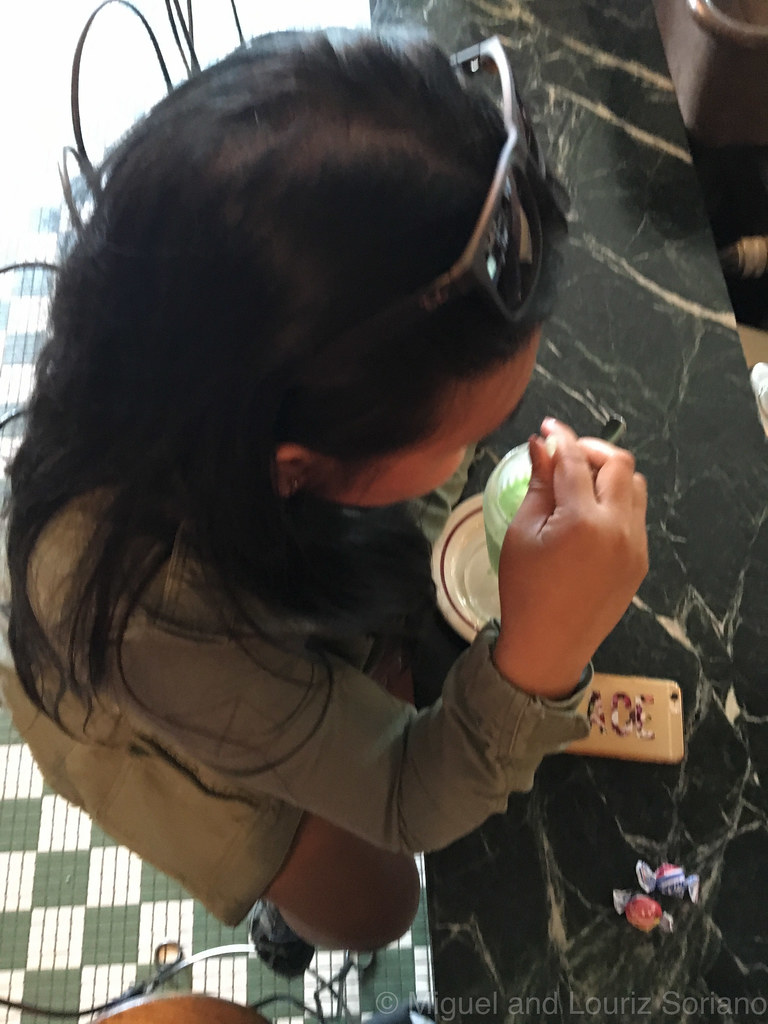 Then we were off to Missouri to see the ruins of an abandoned mansion in Ha Ha Tonka State Park. 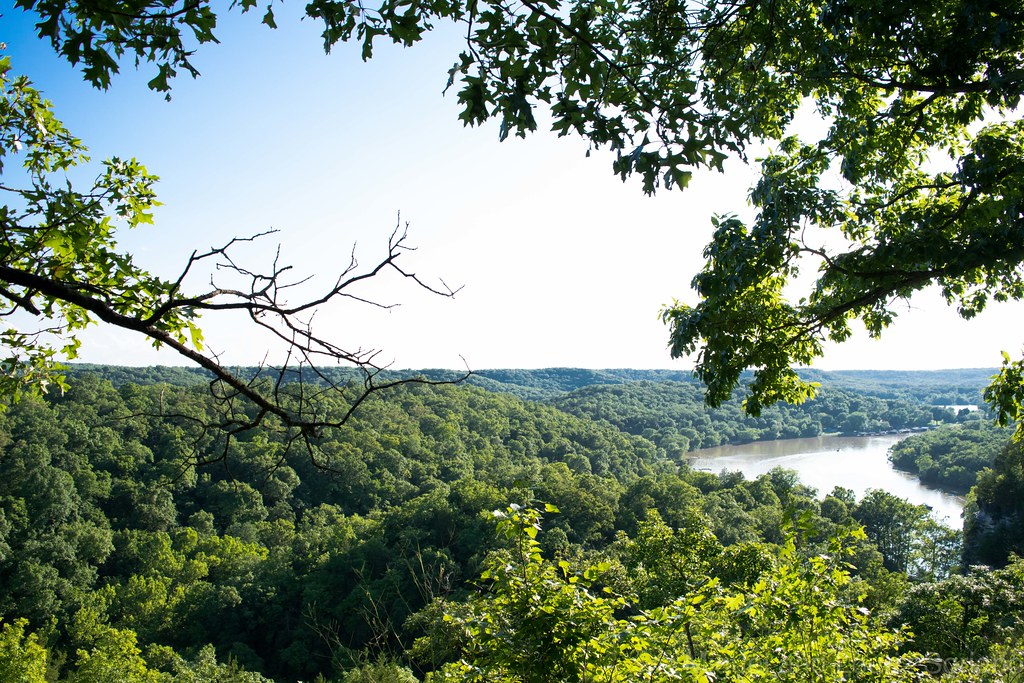 Yes, you read that right. The place is called Ha Ha Tonka.

Story Time! Somewhere in the middle of the Missouri Ozarks, there is reservoir that is called Lake of the Ozarks. On its shores, Kansas City businessman Robert McClure Snyder, Sr. bought a plot of land on which to build his mansion. Meant to look like a European Mansion, construction on the home started in 1904. Robert Snyder Sr. would not live to see his castle completed, as he died in an automobile accident in 1906. His son completes the mansion which would eventually become a summer house then a hotel. Fire destroyed the mansion in 1942. All very unfortunate, but what a sight/site! 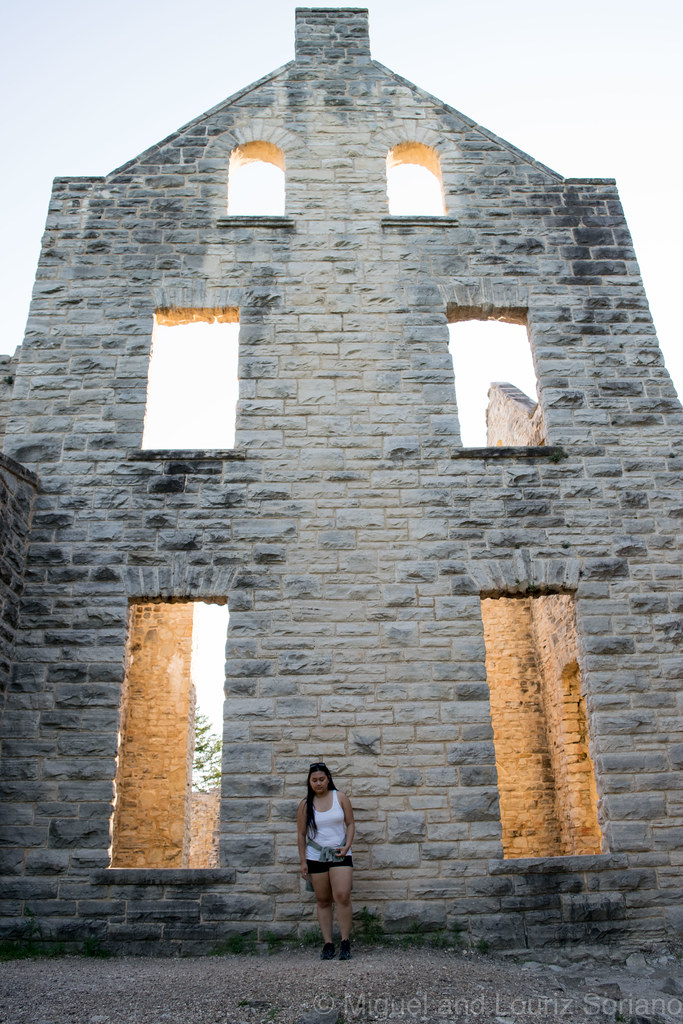 If eerie, ill-fated mansions are not your thing, there’s always the spectacular views. Please don’t mind my otherwise-amazing husband’s footwear. The poor man has literally been driving for hours. 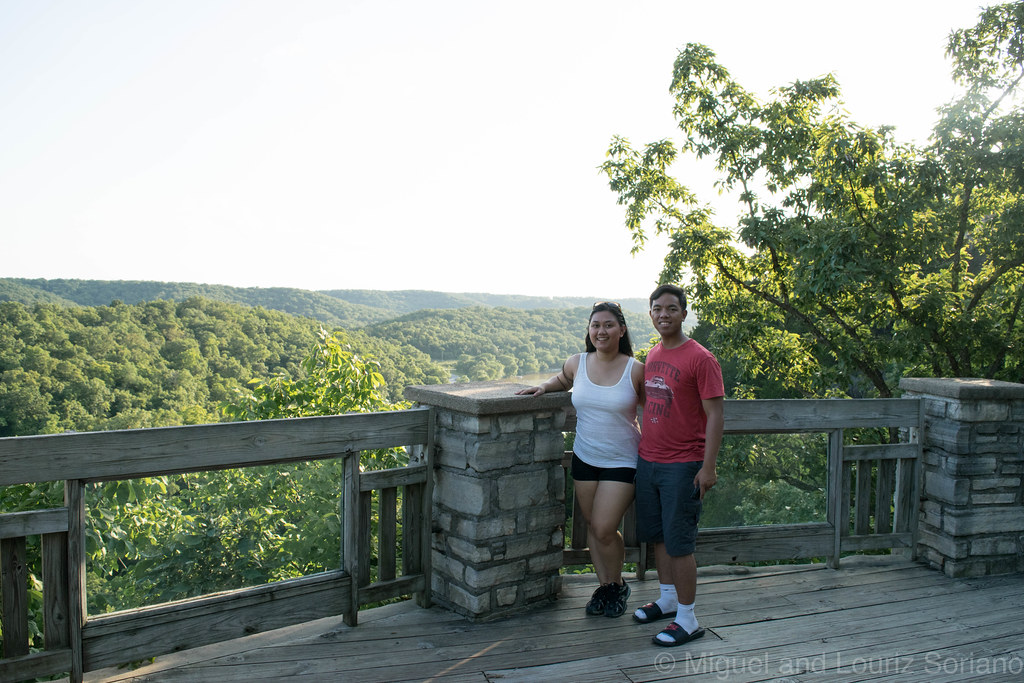 We were not scheduled to be stuck in Missouri, no matter how beautiful it was so we drove out of the park and headed east fast. Just outside of St. Louis, we stopped for dinner.

Me-to-Miguel: Remember that time when we walked into a White Castle for the first time and the whole place was packed with people wearing red? Remember how everybody kept asking us if we were at the game because you too, were wearing red? The St. Louis Cardinals beat the Miami Marlins 5-0 that night. We caught St. Louis in a very good mood.

White Castle was no In-And-Out, but we’ll take it. Those fresh sliders were so good.

The good atmosphere and food was brought down in about 2 minutes though, when our car refused to start as we were about to leave the White Castle parking lot. We called for a tow, but remained unsure on where to go exactly. We prayed and ta-da! the car started again. At this point we were still not sure if we should keep going. I don’t remember why but we kept driving.

We drove to St. Louis to see the Gateway Arch up close but decided against it just as we were approaching. We had a bad feeling about staying inside the city on a Saturday night. So we drove over the bridge to Illinois and took this photo from the other side of the Mississippi. We didn’t dare turn the engine off. 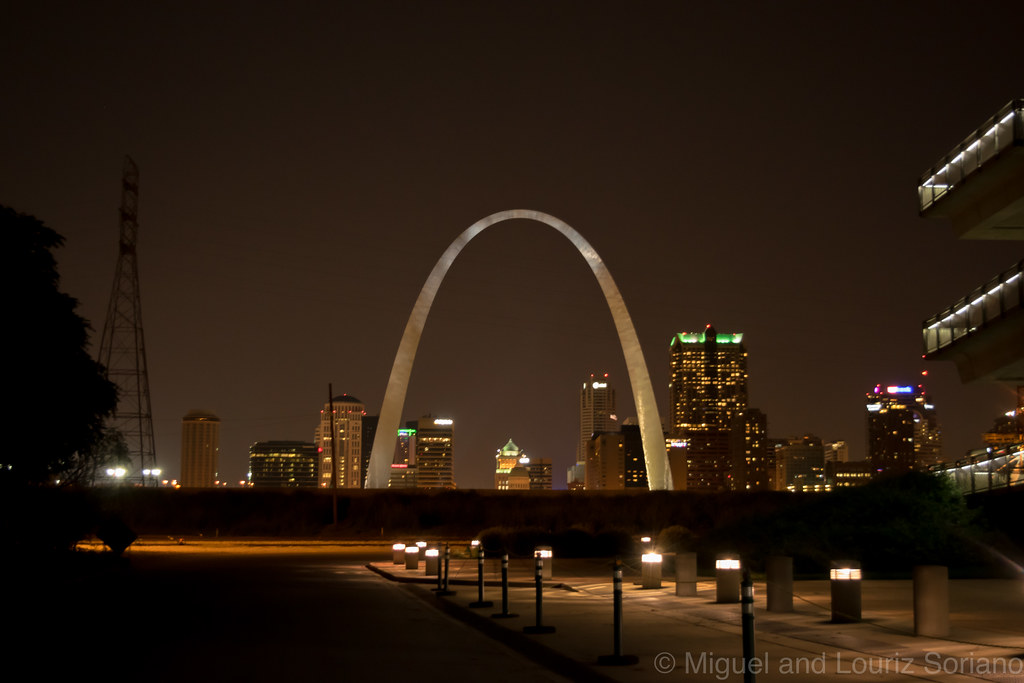 After a quick photo, we were on the road again. It was close to midnight by now. We were under the delusion that we will just drive overnight so we stopped at a gas station about 20 miles out of St. Louis. And then guess what? Our car refused to start again.

By now, it was midnight. There was a very kind person who saw us, and popped the hood (is that the right term, I know very little about cars) and basically pointed out that the thingy that attaches our car to its battery had deteriorated so badly it just sort of fell off. We don’t know how long we were driving with a faulty battery.

My husband bought a vice grip from the gas station and clamped the thingy to the battery and started the car.

One can either take this whole experience as negative or one can choose to thank God for holding us together. We chose to thank God – for the very kind people who helped us, for the police officer right there at the station who assisted us, that our battery didn’t get detached while we were going 80mph on the interstate, for the fact that this particular gas station in the middle of the country was large, well-lit and had vice-grips available…

I was now around 1AM Sunday morning. We had three options: 1) get our car towed to the police station and stay in the small town (with no lodgings anywhere close) until Monday when the small-town garages would open. Clearly, that wasn’t even an option. 2) go back to St. Louis, or 3) get back on the road and get to the next big city east of us, Effingham, about 45 minutes away.

That’s what we did. We got back on the I-70 and started the drive to Effingham. Miguel drove as smooth as he possibly could but we quickly realized we didn’t want to get stranded in the middle of the interstate without any daylight or even streetlights. Somewhere between the gas station and Effingham, we puled into a rest-stop. At this point, we were so exhausted that we could go not a mile further. So we went to sleep in the car and trusted God will show us new mercies in the morning.

The rest of our trip was enjoyable but not nearly as eventful. It’s a lot of driving from here on out. So we’ll combine Day 6 and Day 7 on the next post. This means I only have one more of these posts left for you and then we’re done! Hooray! We can move on with our lives! *sigh* Thank you for your patience, friends. The next post brings us to Pennsylvania!

Up next: Our car gets fixed, we visit Columbus all for a large cream puff and realize we were going to hit 14 states, not 13. All in the next, and final, post of this series! 😉