This is the first in an incredibly late series of posts detailing the anniversary trip we took to Big Sur last September 2015.  The trip was so satisfying and worth it that I decided I’m going to share it anyway. Because if it isn’t on the inter-web, did it really happen? 🙂 Furthermore, maybe it will help those of you who might’ve been thinking of going to have a better trip. Or at least convince somebody to stop making excuses and take that drive. Better late than never. 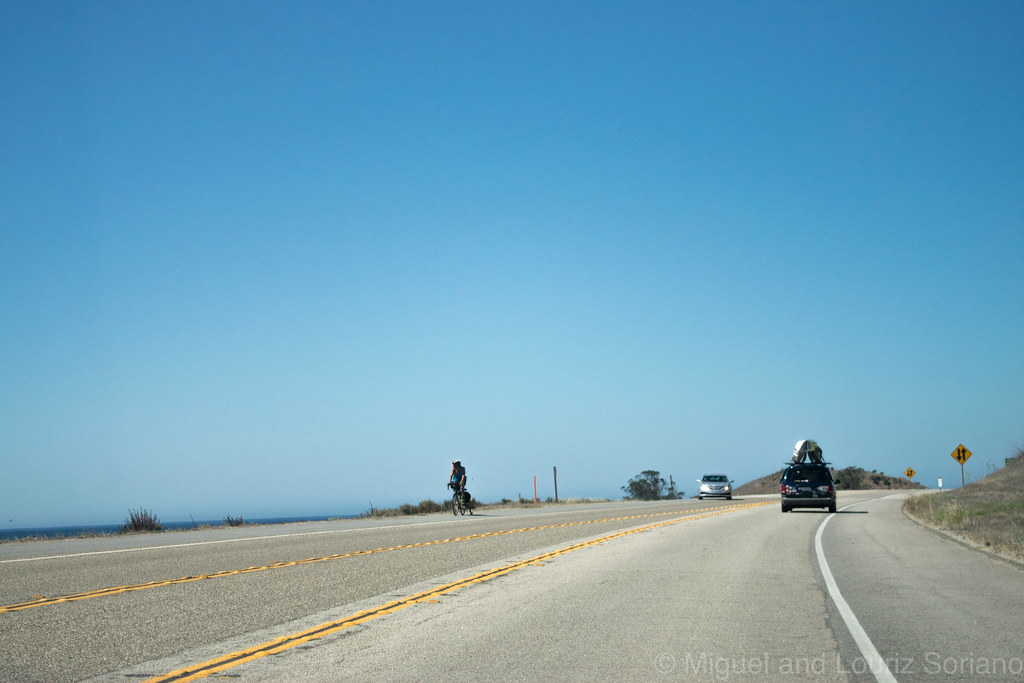 For our first anniversary weekend, Miguel and I took a once-in-a-lifetime (at least) trip to beautiful Big Sur. This refers to a 90-mile stretch of rugged, mountainous coast in central California, famous for its beautiful terrain. Sandwiched between the Santa Lucia mountains and the Pacific Ocean, the coastal highway offers breath-taking views that will really convince you to sing that “I love you California” song from the Jeep Grand Cherokee commercials. Due to strict regulations, the area has remained largely undeveloped and relatively unspoiled. It’s our kind of romantic.

This place has been on my bucket list since I first moved to California 7 years ago. It’s a 4-5 hour drive from LA to the southern end of the Big Sur region. So close, yet so far. Miguel, on the other hand, doesn’t really make travel bucket lists (or any sort of lists) but is up for any trip as long as he doesn’t need to plan said trip. We are very happily married folks, a match made in heaven. 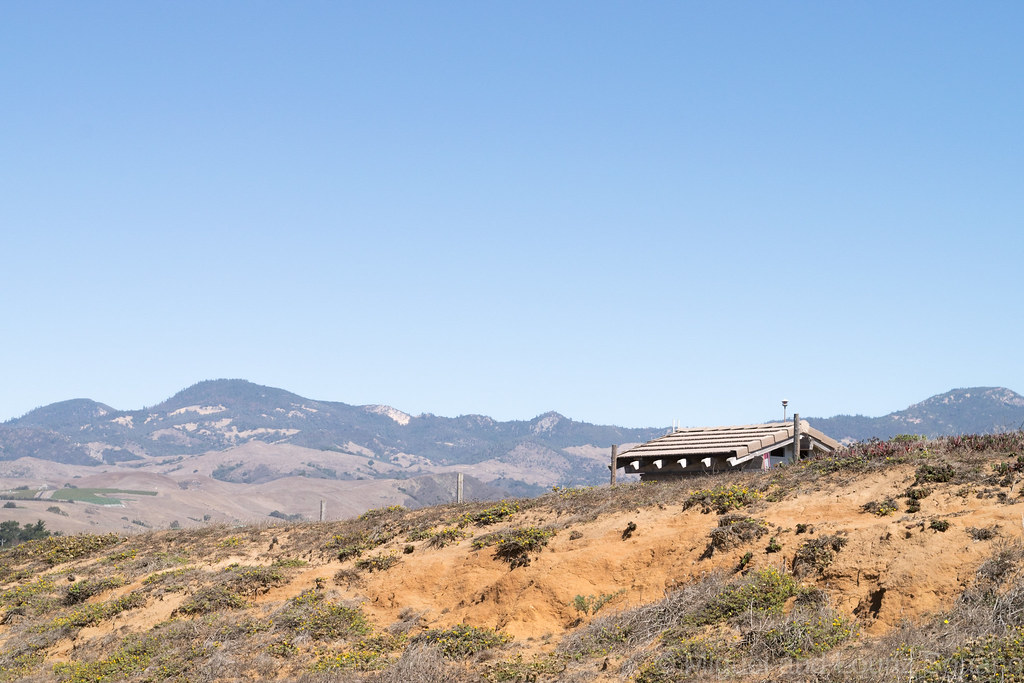 We started on a Friday and decided to take the very scenic route up the 101 and up the coast through Oxnard, Santa Barbara until we hit Gaviota. When we hit that spot, we had to head a little inland towards San Luis Obispo where we stopped for a quick coffee break and last minute supplies. From SLO we took HWY 1 back to the coast, passing Morro Bay, Cayucos and Harmony.

I took over the wheel just before we hit Cambria so Miguel could take a nap. Cambria is a little off the shortest way to Big Sur, but I wanted to drive by anyway. We also took the chance to fill our tank there. I wish we could’ve stayed longer but since we were unsure how long we still had to drive (or how challenging it would be), we were anxious to get moving. Or rather, I was anxious, Miguel was asleep at this point.

I couldn’t resist the urge to pull over a few times to take the coast all in. By the time we reached San Simeon and I see that gorgeous coast, I already knew we made the right choice in picking our trip. 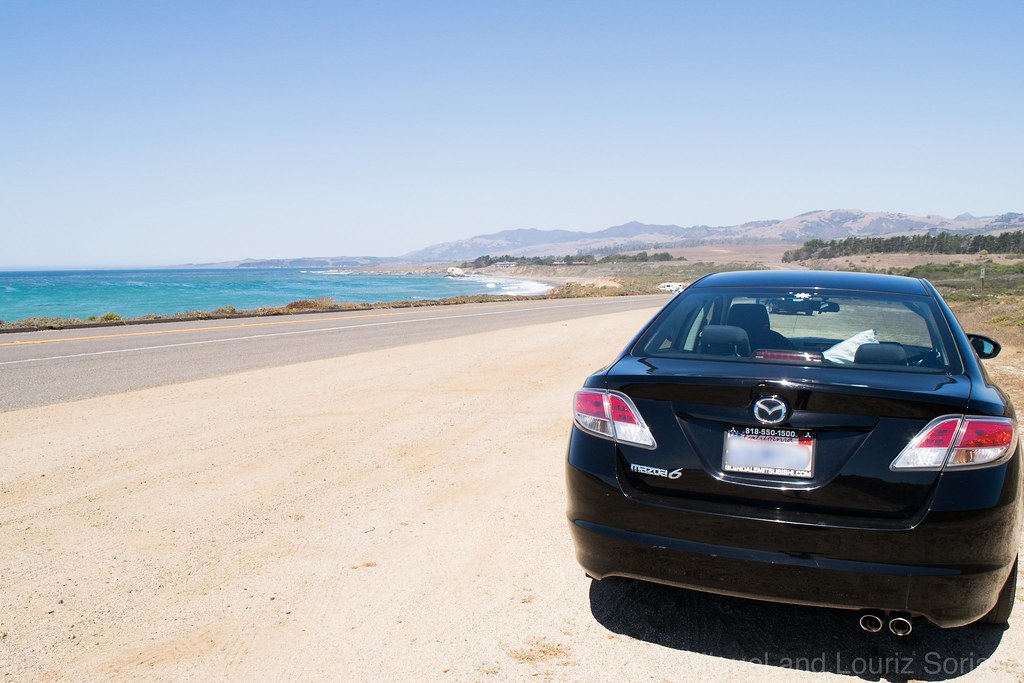 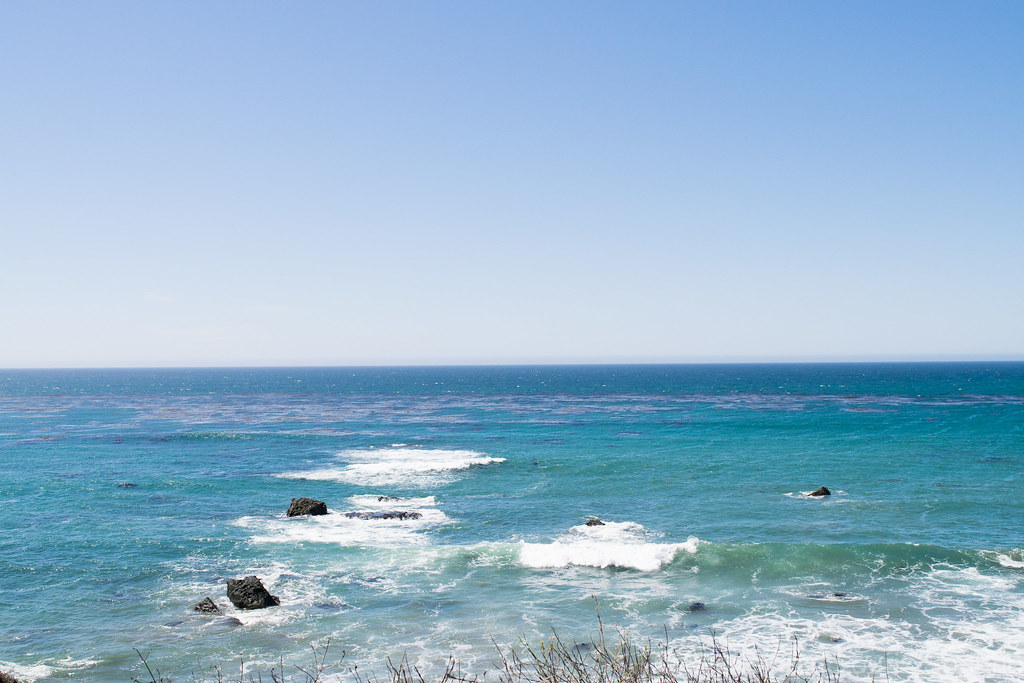 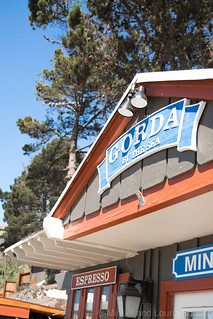 We switched drivers again just before Gorda where we stopped for a quick restroom break. Let me tell you that driving up that coast is not for the faint of heart or of nerves. As long as you follow the signs and drive cautiously, it is relatively safe. But boy, oh boy, there are some sharp, blind turns up there. Note: Cell service is not guaranteed. Especially on the road in between towns or landmarks, you can’t depend on 4G or even 3G. Try good ol’ GPS. Bring your GPS navigators, bring paper maps, download a GPS map on your phone – it’ll work without 4G as long as your phone is GPS-enabled. I did all that to be safe and I’m glad I did. Signage is not always easy to spot and there are long stretches of road with nothing but beautiful views. Without something to hold on to, the long drive can induce a panic attack or at least so much worry that you’ll forget to look out your window and miss out on one of the best roadtrips in North America. Come prepared. 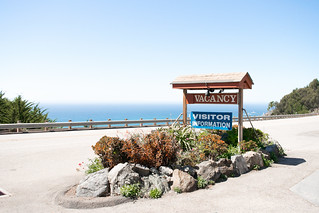 Don’t let the short distances fool you. Most of the time, we had to drive under 40MPH just to be on the safe side. For most of the stretch, the route was no wider than a two-way street, with a wall of rough mountain on one side and a sharp cliff dive into the ocean on the other. Don’t rush it. There are various safe turn-outs and overlooks along the way, whenever the width of the road would allow. We had to resist the urge to stop at every one, knowing that we would pass by the same route the next day. This is a true road trip – a drive that is as beautiful as the destination. 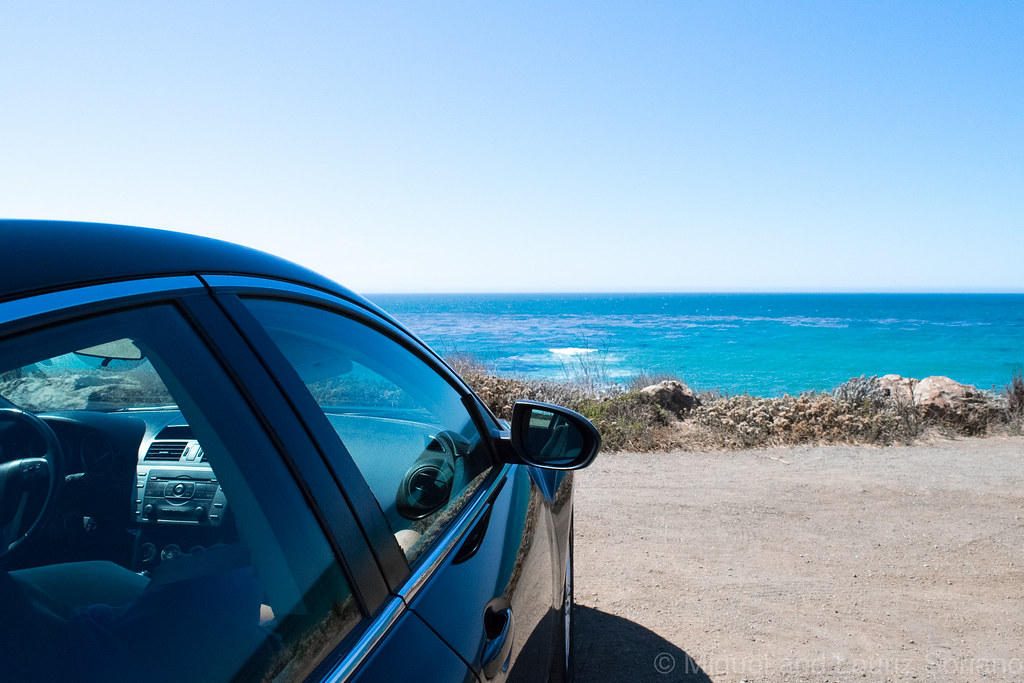 Speaking of destinations, we got to our campsite around 3PM. A little later than I would’ve liked or intended but no matter, we were intact, thank God. Accommodations in Big Sur can get quite pricey and those wishing to camp in public campsites usually have to reserve their sites months in advance. We only had about a month and a half to plan this trip so our options were limited. 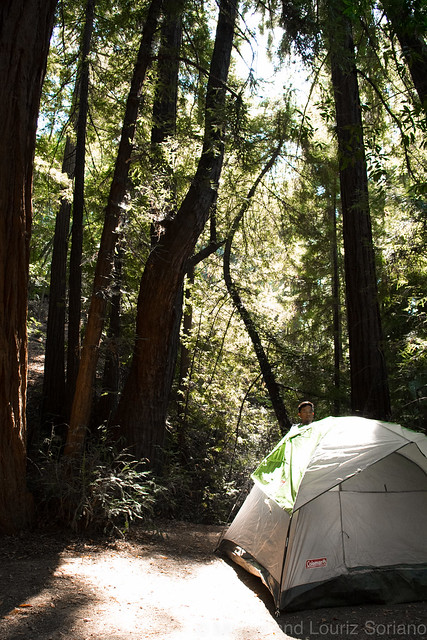 We decided on Ventana Campground because a) We could afford it – $55.00/night inside privately-owned grounds, b) it was a campsite – the hubby didn’t want to stay at a fancy hotel room away from the woods, c) it was available – we booked it a month before our trip. Yes, there are much cheaper sites on state-owned grounds, but again, those were unavailable by the time we booked. 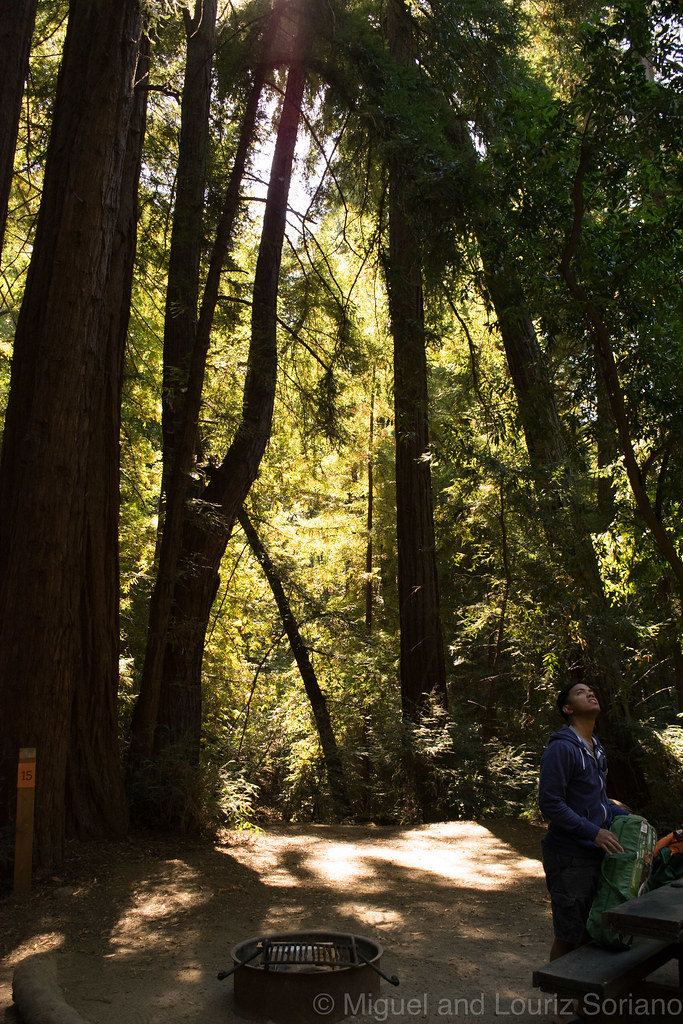 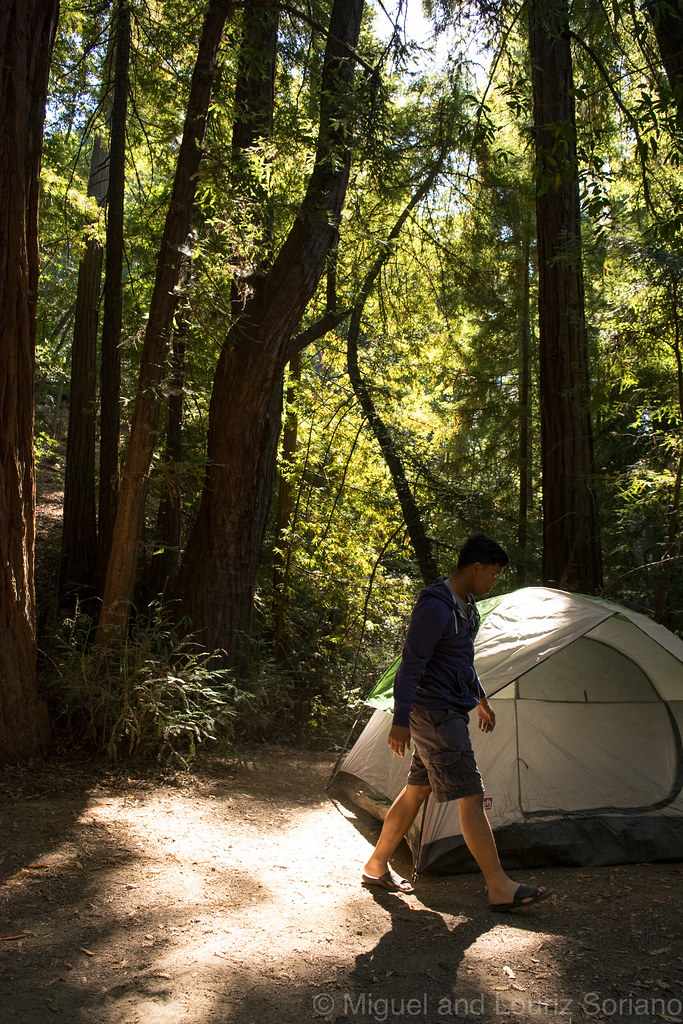 At $55/night, we thought it was our best option. It was rugged and casual yet secure and safe. Our site was clean and far enough from the next site, yet near the cleanest restrooms I’ve ever had on any camping trip. There were also token-operated showers available. The magical woodland experience with all modern conveniences. Overall, we agreed that it was the best of both worlds.

By the time Miguel finished setting up camp, we were tuckered out and just wanted to go to the beach. We drove to Pfeiffer Beach intending to catch the sunset. 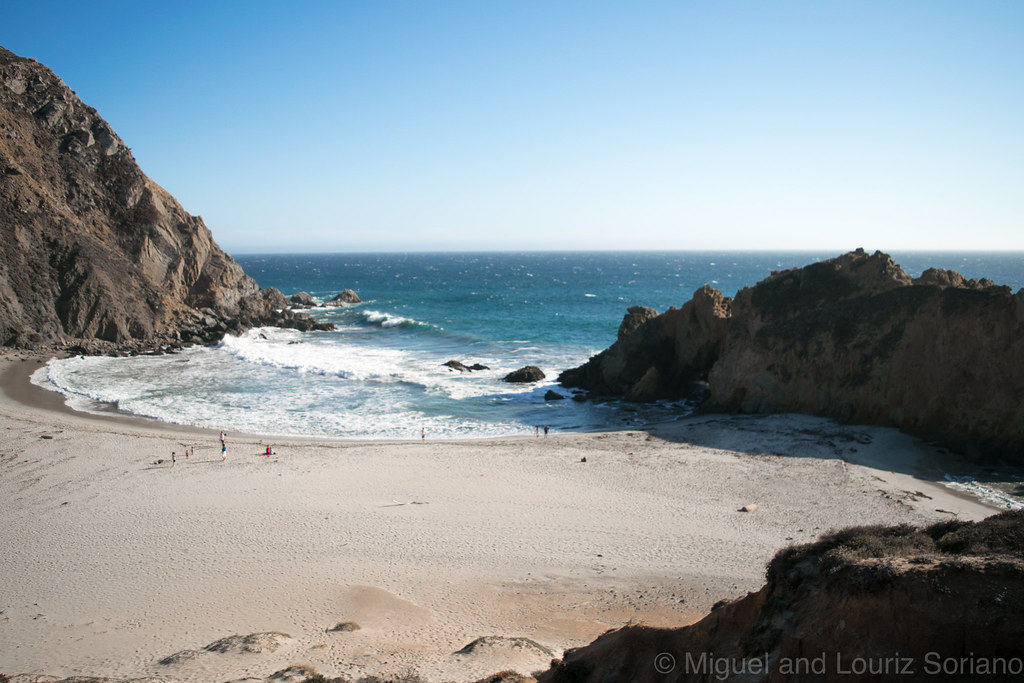 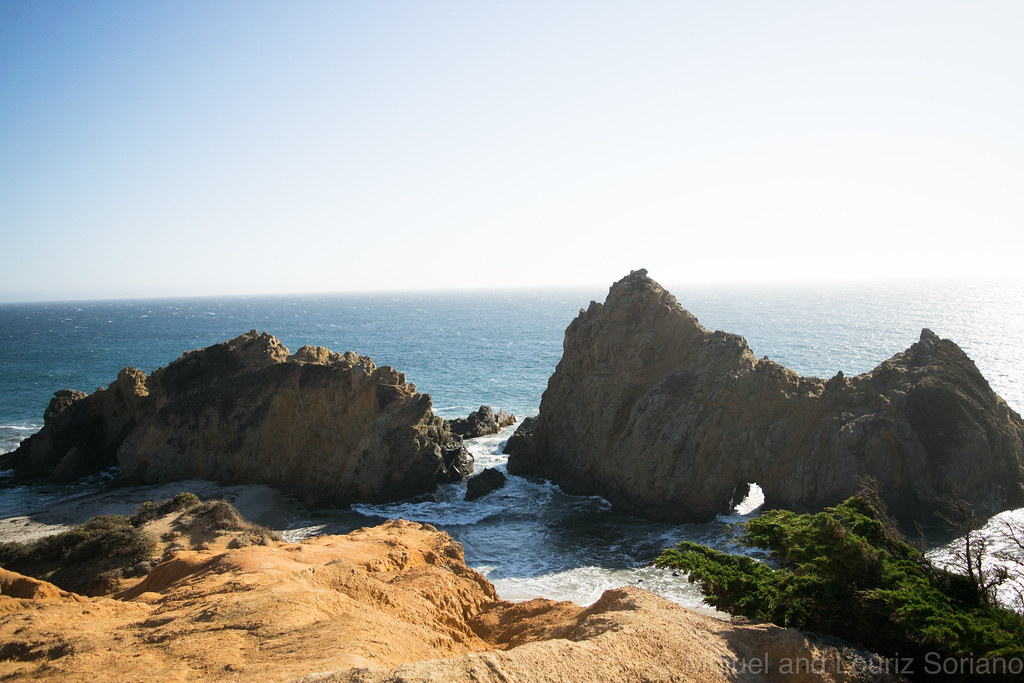 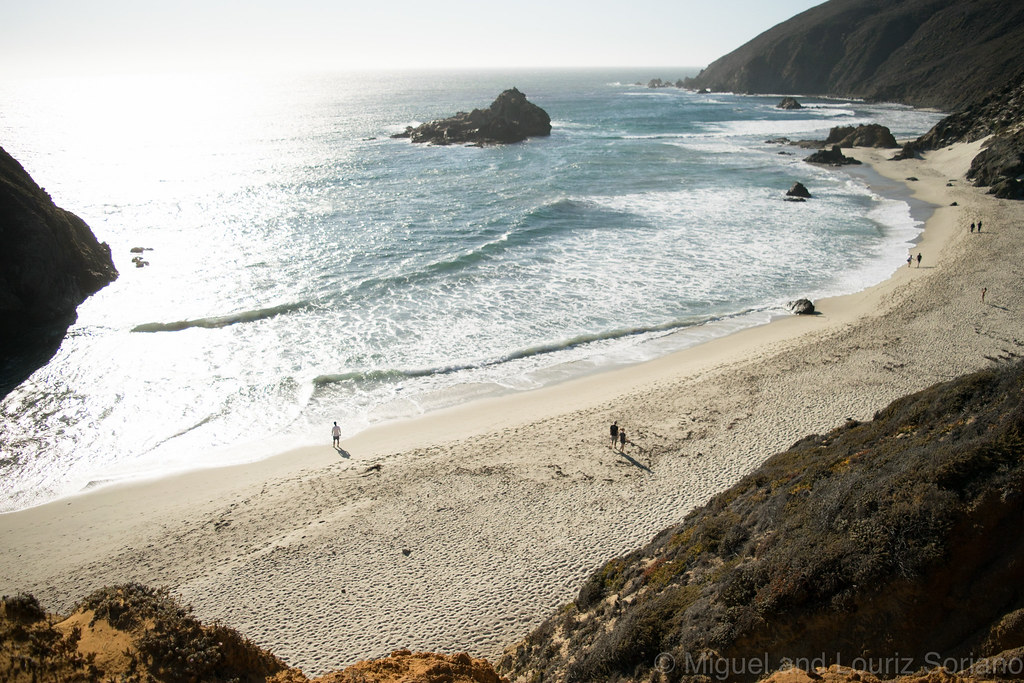 By the way, yes, I checked all the sunset and sunrise times beforehand. I’m just that kind of person. We got to the beach about 2 hours earlier than the sunset time so Miguel went off to climb some rocks. I don’t think he was allowed to, but let’s just say Miguel sees “Do Not Enter” signs and thinks “suggestion” not “warning”. Getting that panoramic view from a higher level isn’t exactly a recommended safe hike. I played it safe, stayed on lower ground and took the time to sketch while listening to the sound of waves crashing against the gigantic rocks. 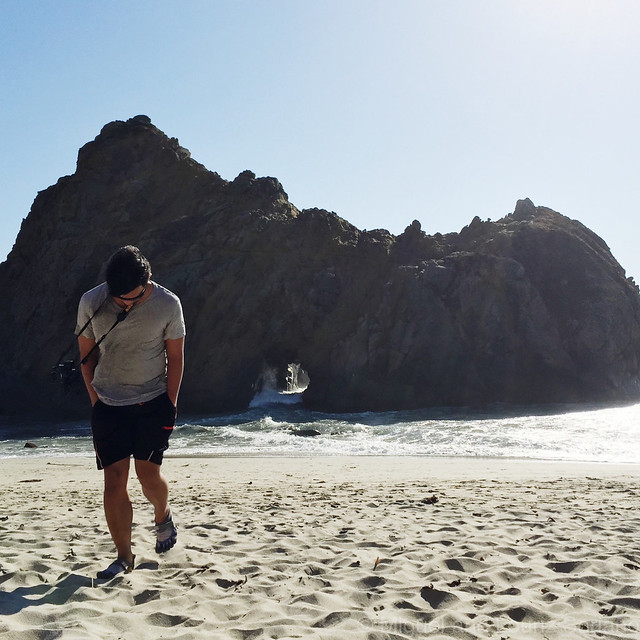 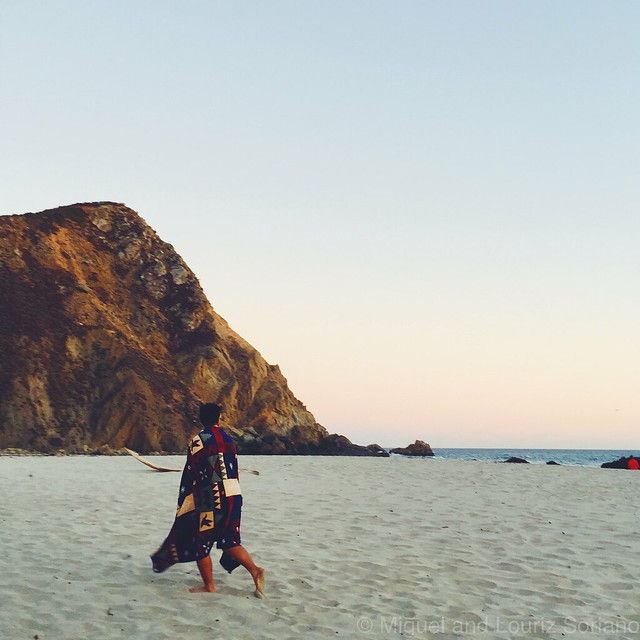 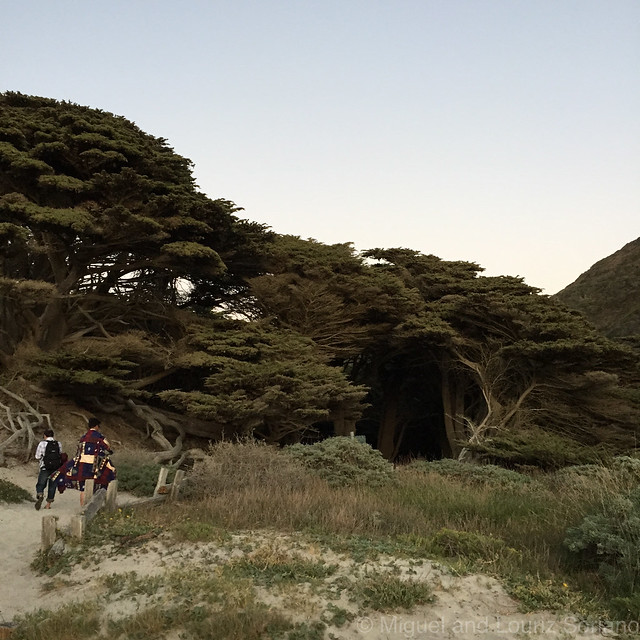 This was the only time we spent actually sitting on the sand by the shore here, so the 3 hours we spent were definitely worth it. 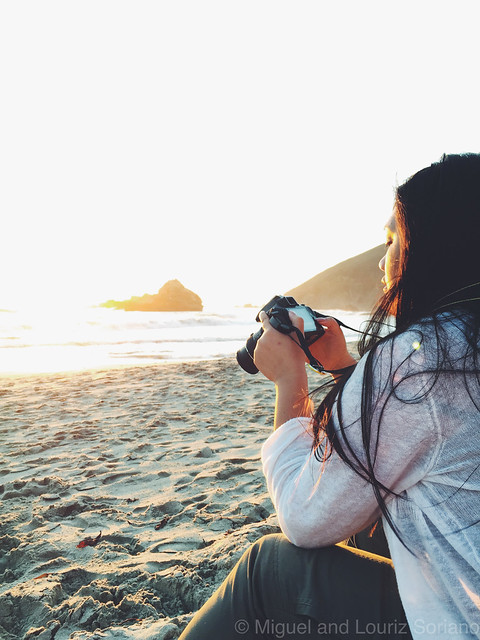 I mean, take a look at that golden California sunset. We watched it, ate sandwiches and talked about what an amazing year we’ve had. Yes, we’re cheeseballs like that. Even more so when the view is like this. 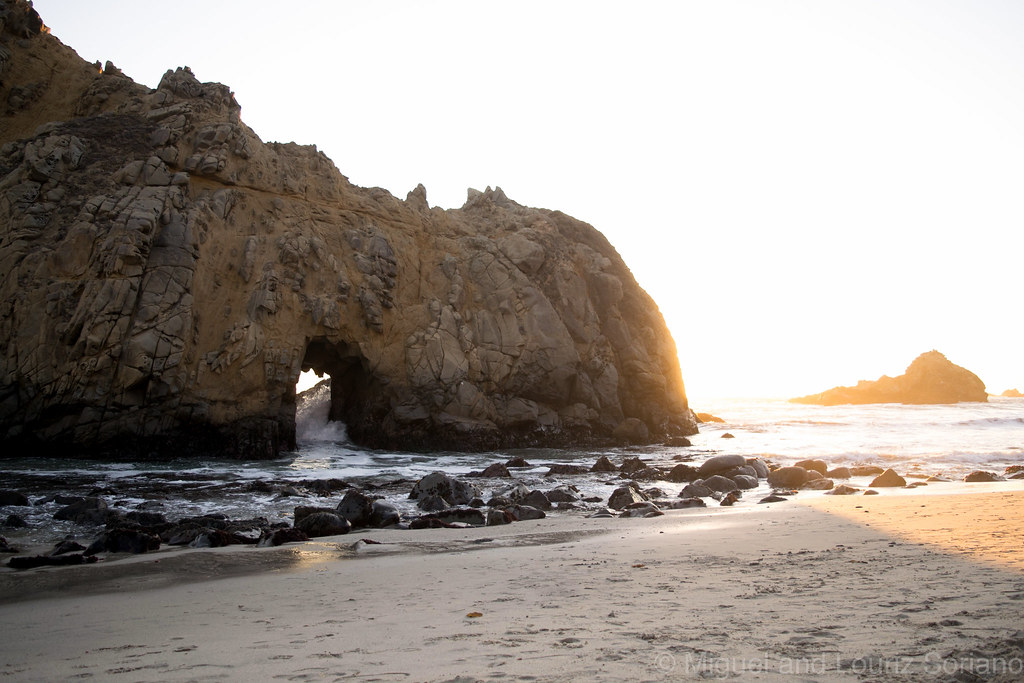 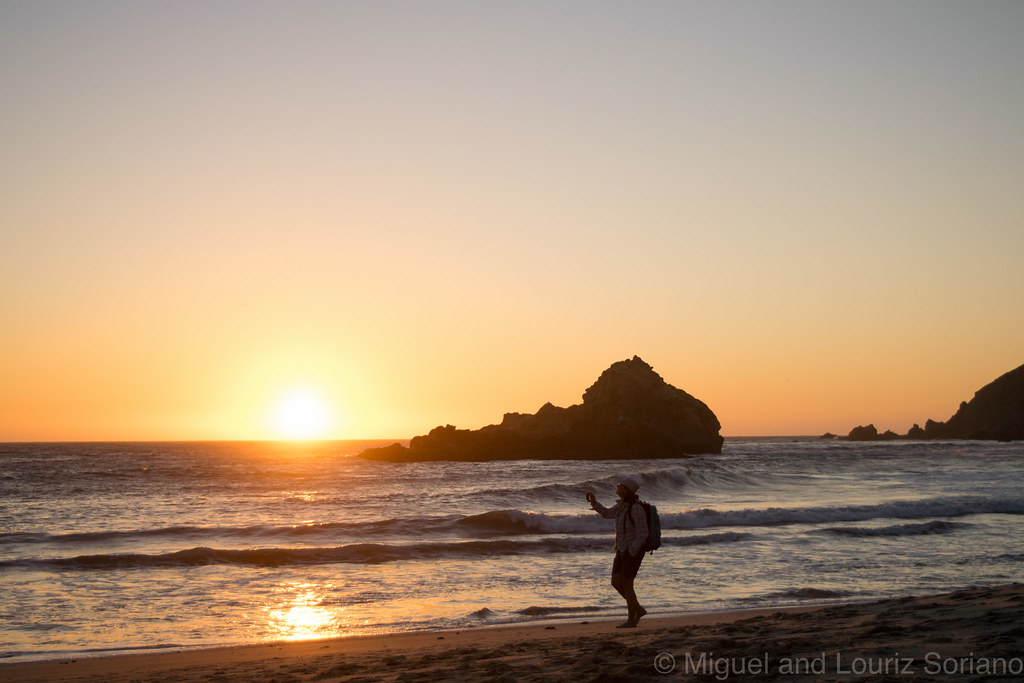 Note: To get to the beach, you will have to enter through an inadequately marked driveway and pay a parking fee to enter. We got there early so we got a good spot. From there is a short walk through somewhat eerie woods to get to the beach. That’s one tip for you, bring cash for parking and don’t balk at the prices. It’s a small price to pay for the upkeep and access to such beautiful sites.

We left around 7:30PM and set off to find dinner because we hadn’t eaten anything but nutella sandwiches all day. We decided to go to the famous Big Sur Bakery and Restaurant to find that it was packed and that we were a tad underdressed. It’s a really nice place (Yelp – ★★★★ – $$) but I think we were felt too tired and sticky to appreciate it to its fullest.  The food is made with mostly local ingredients with the intent to really give you a taste of this secluded region. 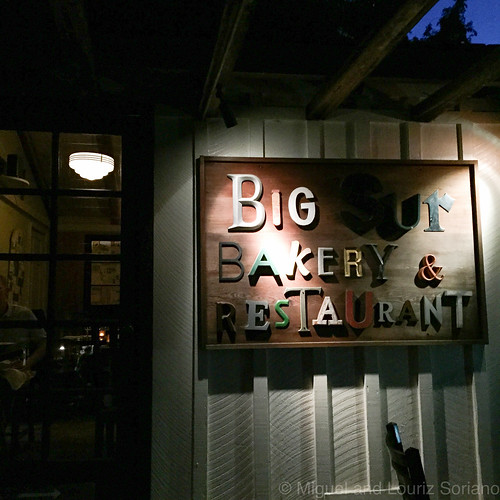 We don’t know if it was just the particular weekend we were there, but the diners we encountered in these famous Big Sur restaurants were not in casual attire. The restaurant may look “rustic” but the fare inside is beautifully plated prime beef and halibut. If you’re not up for that, pick someplace else. We were definitely not dressed up enough for this one – we were wearing our LA casual clothes. But we were too hungry to care and ended up taking the available seats at the counter because we can’t stand to wait for an actual table. The food was delicious, but it’d have been more enjoyable if we had actual comfortable chairs. 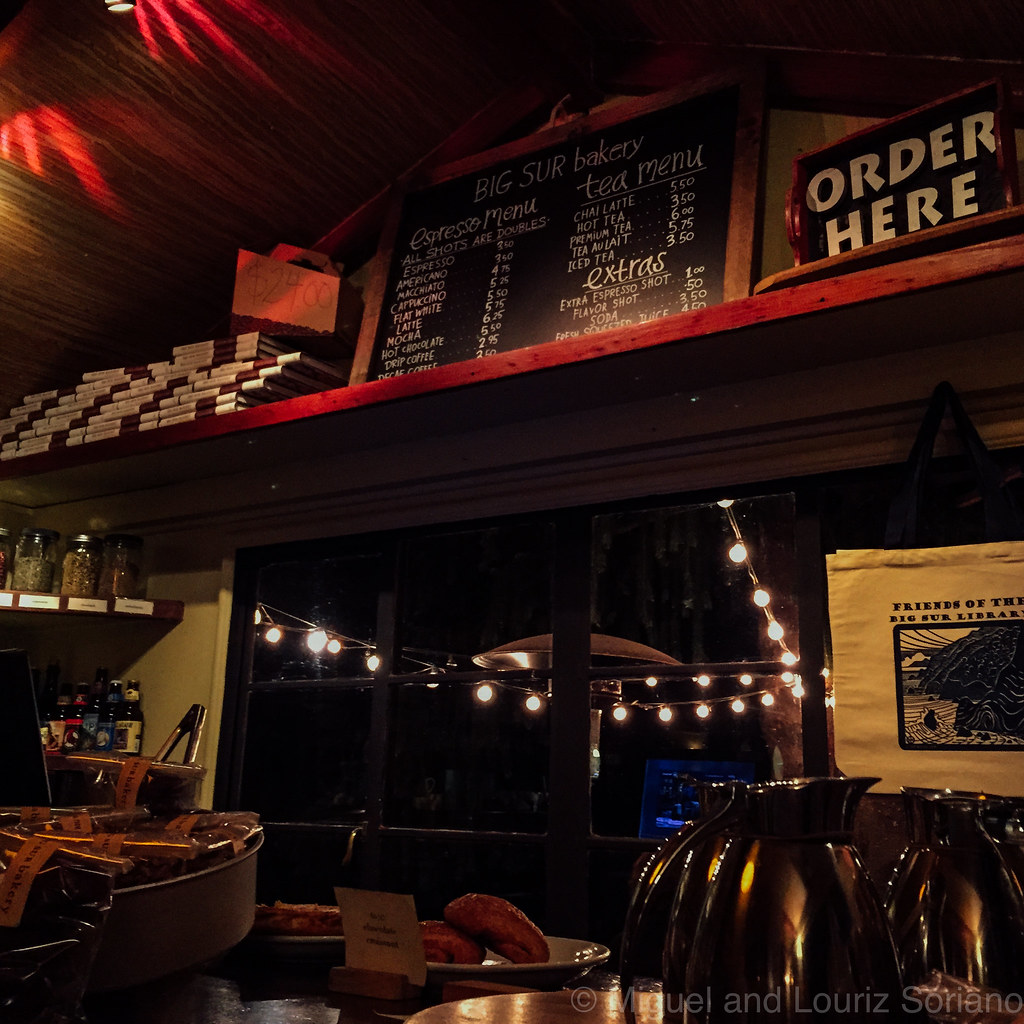 That concludes our first (half) day in Big Sur. After dinner, we went back to camp and crashed by 9PM. We wanted to be up early for a scheduled activity the next day and there was no Netflix or Hulu to fend off the sleepiness or intimate conversation. It’s good to be reminded of the world that once was pre-internet. It wasn’t so bad my friends. It wasn’t so bad.

Stay tuned for Day 2 and 3! All photos in the post taken by Miguel and Louriz Soriano.