If you’ve visited my VSCO Journal or follow me on Instagram, you may have seen the pumpkin photos already. “That time we picked pumpkins” was one of those days – perfectly ordinary yet remembering it’ll make me smile for years to come. Here’s why: 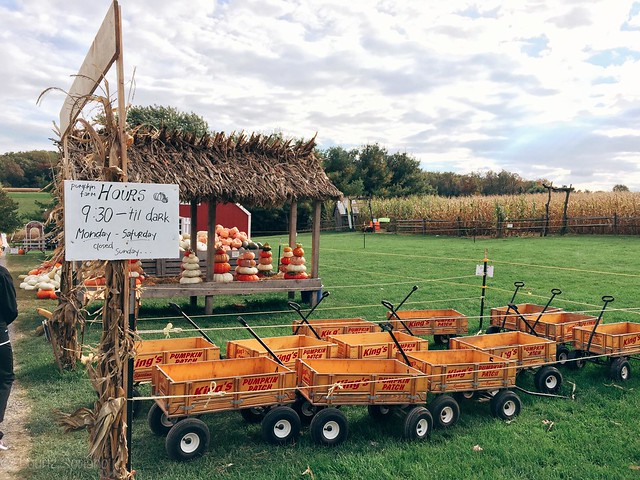 It was mid-October when I visited and the pumpkin craze was already in full-swing. After getting some office work done, Mama, my brother Jabez, my little sister, my brother’s girlfriend Lydia and I drove down the road to to King’s Farm, a working Amish farm in Parkesburg, PA. 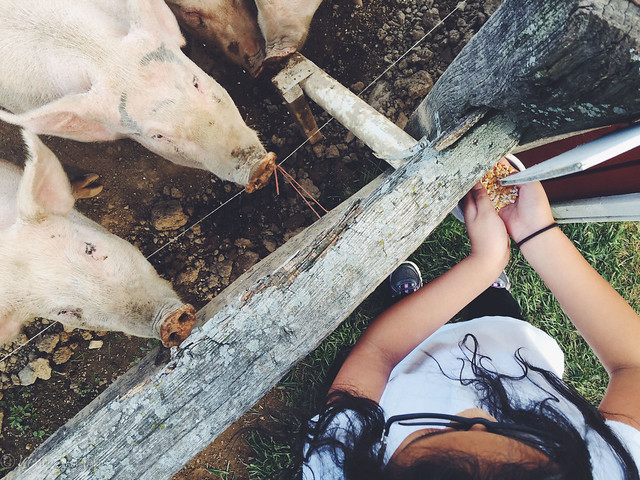 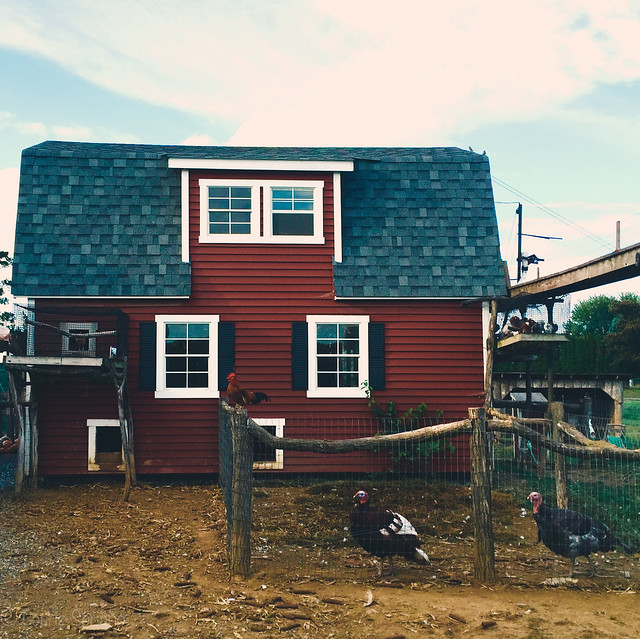 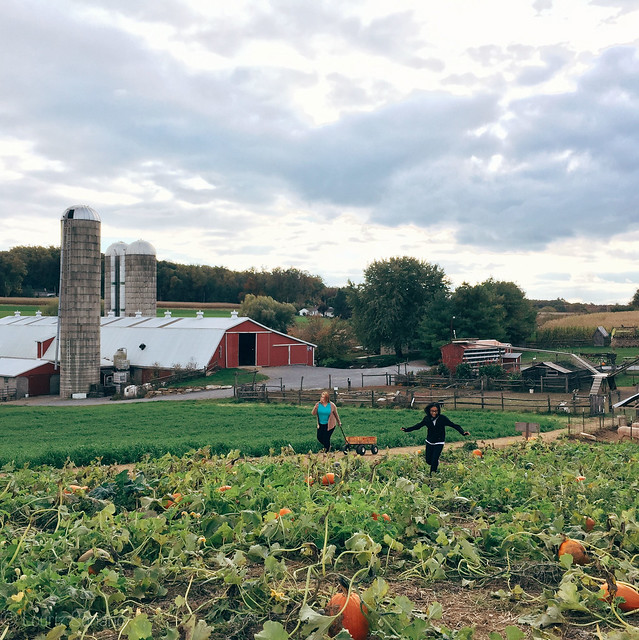 Lydia was our unofficial guide to Picking the Perfect Pumpkin. She herself grew up on an actual goat farm in rural Ohio and she had promised me a small demonstration of the Fall traditions she grew up with. 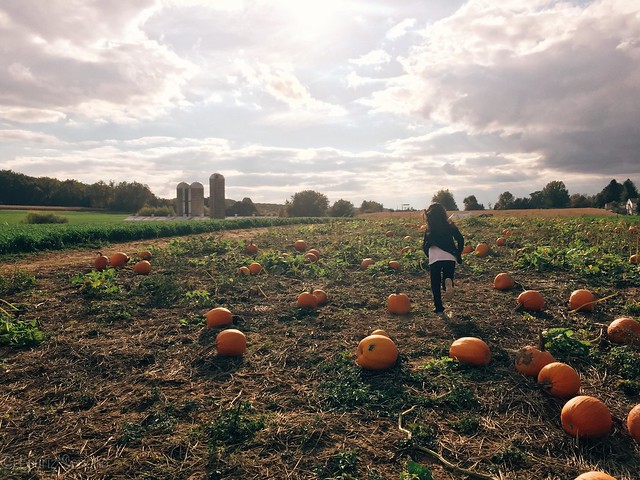 You can totally tell Liddy’s done this before because she picked a pumpkin fast. 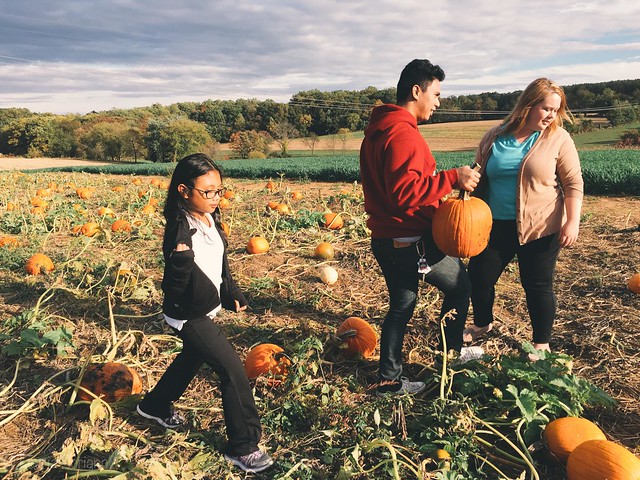 I, on the other hand, took forever to pick a pumpkin because A) I couldn’t decide which one I liked because B) I was too excited to understand the criteria given by Liddy for judging the pumpkins objectively, and C) it was my first time and the thought of picking the wrong pumpkin made me nervous. Also, D) We were taking too many pictures (we’re still Filipinos after all) beside the pumpkins, sitting on the pumpkins, hugging the pumpkins… 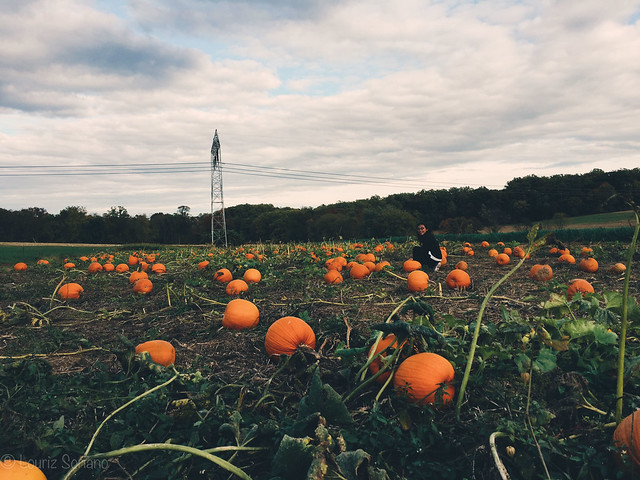 When Mama and I finally picked ours, we got to clip it off the vine ourselves. Out of the four pumpkins on our overloaded wagon, mine was the biggest. Lydia’s was the smallest. Can you tell who knows what they’re doing here? 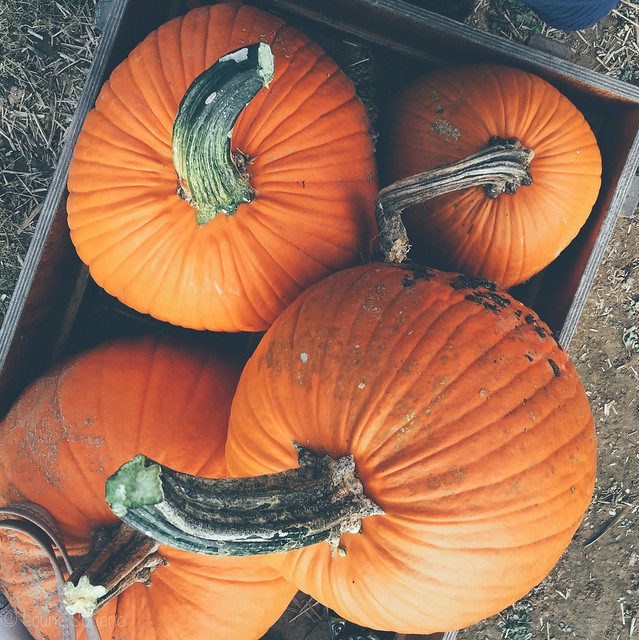 We found time to carve our pumpkins a couple of days later, after the conference ended. Big thanks to Mommy and Daddy Strauser for letting us mess up their kitchen! You can imagine the amount of pumpkin gunk that I, a first-timer, had to take out of my large pumpkin. 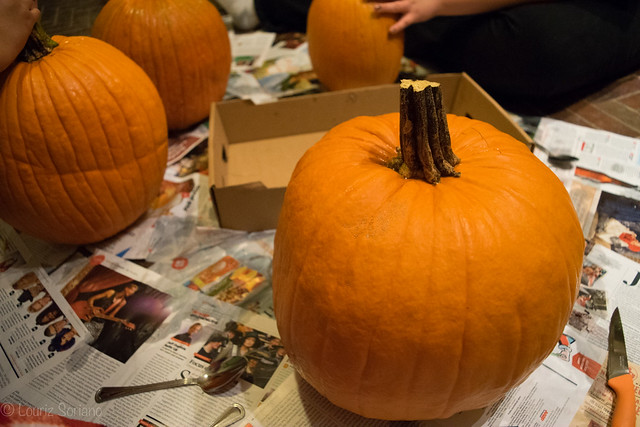 Oh and the pumpkins were left on the patio in refrigerator weather for 3 days and were basically frozen. I literally cut myself carving it. My mother had to help me finish. I know, I’m a wuss. 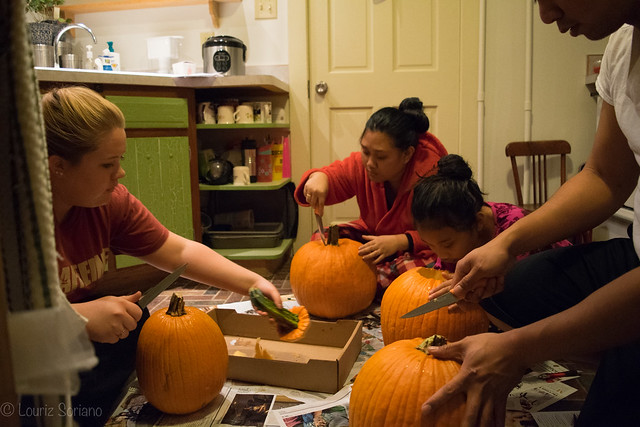 My clumsiness and bleeding cut aside, I enjoyed it all. Hearing Liddy talk about her family back in Ohio and the traditions she grew up with made me think about our own family, our own traditions and how much things have changed from when we were kids until now. 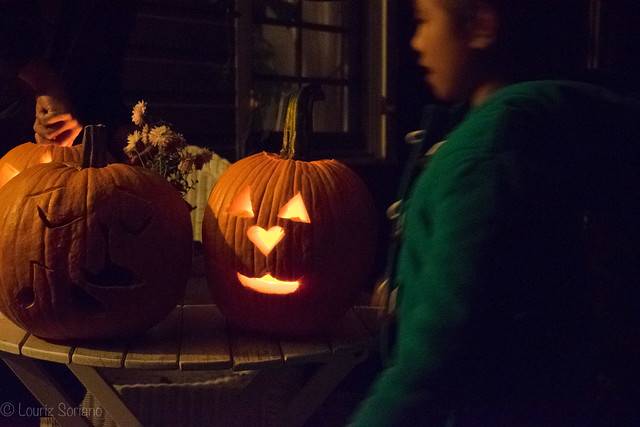 When I was around the same age my sister is now, my brother and I were halfway around the world from where she currently lives. We had very little sense of a permanent home, crossing borders at least every few months, sometimes every few weeks. We would spent a holiday in this city and by the next holiday, we would be in a different one. We couldn’t plan that far ahead. It was an extraordinary, exciting childhood but lacking in the rhythmic changing of seasons, of yearly traditions other children had – yearly traditions that my sister is now having. Not only is she experiencing a more “stabilized” childhood, she’s experiencing it in an entirely different culture. My brother and I had a somewhat confused mix of star lanterns, Chinese New Years and mooncakes. Our sister has Christmas stockings and turkey, 4th-of-Julys and pumpkin pies.

This gap makes small events like this 2-hour visit to King’s Farm or the frozen pumpkin carving even more special. We might not have exactly the same memories and traditions and we may end up cutting ourselves trying to learn new ones but I pray that my sister will be engulfed in the same love that makes all of these traditions meaningful in their own way.

Because that is what is important in any real family tradition – the family not the tradition. It’s remembering the truth together by placing the star on top of the tree. It’s expressing gratitude together in giving and receiving each hand-picked gift. It’s talking about hopes and dreams together around every holiday meal table. It’s the people that makes the tradition special, no matter what tradition it may be. It’s not the pumpkins, it’s the kin. 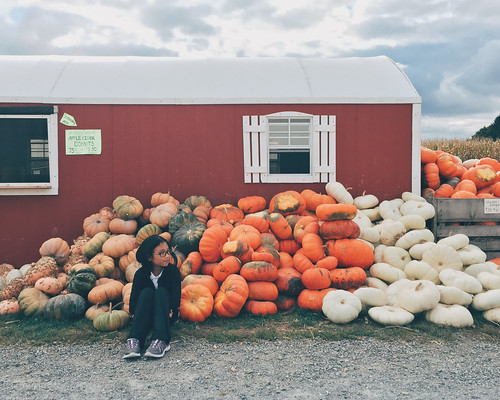 So I’m thankful for pumpkins and the upcoming Christmas trees and stockings and what they represent: Lydia, Mommy and Daddy Strauser and the little community that is lovingly sharing their own traditions with my sister, and by extension, me. I smile when I think of you all.

Here’s to family, both the one God births us in and the one He brings us to  – and traditions, both old and new.