Last month, we went to Joshua Tree National Park for a relaxing day in 100°F weather. I had just gotten back from a month-long stay in Pennsylvania, which had some very late Spring showers, so I was craving some of that dry, Southwest desert air. I’m kidding. Dry heat is horrible. But the Mojave is fascinating and teeming with desert wildlife. This patch of it that we visited is only 3 hours away from Los Angeles which makes it the perfect, unplanned getaway. 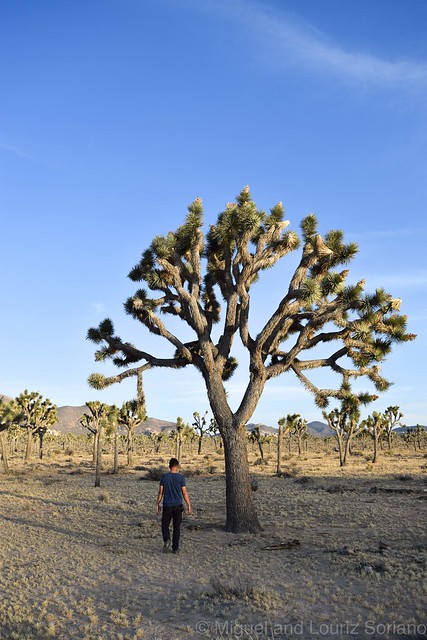 Joshua Tree National Park is known for, well, Joshua Trees – a type of Yucca tree that looks like it belongs in a Dr. Seuss book. A “forest” of it looks otherworldly but my, oh my, are they beautiful. Beautiful and wondrous, for anything that can thrive in such an unforgiving environment can’t help but inspire wonder. Legend has it that immigrant Mormons named the tree after the biblical Joshua, with his hands up in prayer. I imagine that under the intense desert heat and dehydration, it was easy to take this a sign – an oddball tree with praying hands beckoning them to a promising new life in the west. Imagine being met with this horribly dry, infertile wild west and thinking, “This is my chance for a new start.” Forget New York City. If you can make it in this desert, you can make it anywhere.

This wilderness, the western pioneer story and the Joshua trees brought me back to one of my favorite passages in the Bible – the one with biblical Joshua and the new nation of ex-slaves about to enter their own, much more fertile Promised Land.

The desert is a very strong picture memory for me, probably even more to the people of Israel. They spent 40 years roaming the Sinai wilderness where the Bible says that they had no other source of food but an otherworldly substance called manna. In the morning, white flakes of manna would come down from heaven and the Israelites would collect enough of it for the day. If they tried to gather more or store it for the next day, which God explicitly told them not to, the manna spoiled. If you were a big worry wart and  you thought, “What if God doesn’t remember to send manna tomorrow? Let me just save some in case he changes His mind…”, then you’d literally wake up with maggots in your pantry the next day. 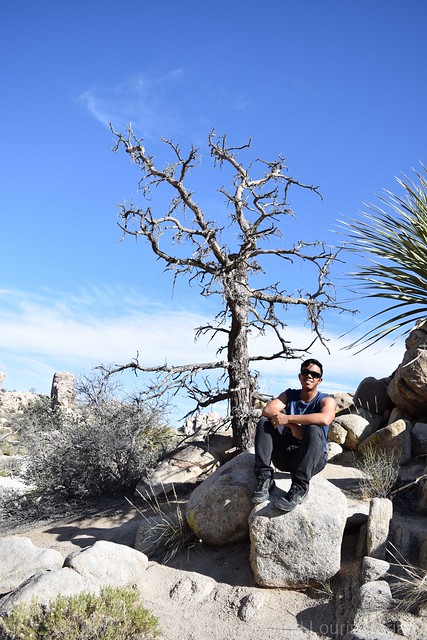 There was no guarantee that there will be food tomorrow – other than that God said so. They had never even seen this so called land of “milk and honey”. It was the stuff of ancestral legend. They just had to trust God’s Word and God’s character. It is a carefree person’s dream and a control-freak’s worst nightmare. I tend to side with the latter.

Why did God do this? Deuteronomy 8:3 was quite explicit on that as well. Simply put, the Israelites needed to learn to trust God.

He humbled you and let you be hungry, and fed you with manna which you did not know, nor did your fathers know, that He might make you understand that man does not live by bread alone, but man lives by everything that proceeds out of the mouth of the Lord. Deuteronomy 8:3

That verse is one of my favorites. It puts Jesus’ quotation of it, when He himself was being tempted in the wilderness in Matthew 4:4, under a whole new light, doesn’t it? The people of Israel lived quite LITERALLY by every word that proceeds out of the mouth of the Lord.

An elderly Bible school instructor, one of of the wisest, kindest people I’ve ever met, once told me “You shouldn’t feel sorry for yourself if your life feels like it is in a never-ending wilderness. Life in the wilderness might be the best kind of life there is.” The more I experience this thing called “adulting”, the more I agree with him. The Israelite’s life in the wilderness was a life of complete and total reliance on God. They were being prepared for their Promised Land, by living on God’s promises everyday. They had no permanent home as they could not build stone houses. They could not plant in the spring because they did not know if they’ll be in the same ground by next fall. They were traveling to a place they’ve never seen with an arrival schedule that they don’t know. Yet Deutoronomy 8:4 says that their clothes did not wear out and their feet did not swell. They were taken care of. They had no idea where they were going and when they were going to get there, but they were taken care of.

Have you ever experienced that? Technically having nothing but somewhat still turning out alright? I consider my younger years our “wilderness years”. For most of my life, my parents were full-time ministers. There was very little conventional job “security” or “benefits” with that. When the tithing or church attendance was low, our resources were also low. Supplies were even more scant in the mission field. The financial support was never stable but we were taken care of. I know I have never truly starved in my life. I thank God for that – I know such is not the case for everybody. There are still people, Christ-followers, living in very real deserts where every day, the food is scarce and the threat to their lives are real. They are still trusting God for their next meal, for their next breath. 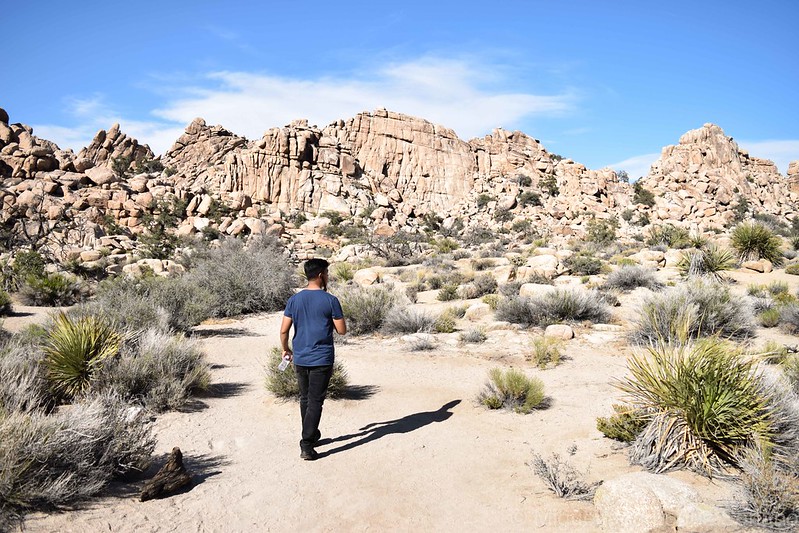 But let’s face it, for most people, life in America is not so much like the desert, is it?  Not in relative terms. Just like the way you can breathe in the humid air when you come out of the airport in Philadelphia and you know you’re not in the hot and dry Southwest anymore. When you’re so used to dry heat, you can tell there’s water in the air.

When I first arrived to this country as a teenager, I was told that I can have anything I want if I work hard enough, if I hustle enough, if I am tough enough. For many people, especially to an immigrant like myself, this is the promised land. This is the dream. This is where stone houses are built. This is where seeds are planted in one season and harvested in another. This is as good as it gets. Or is it?

“a land where you will eat food without scarcity, in which you will not lack anything; a land whose stones are iron, and out of whose hills you can dig copper.”

What a promise indeed! But even then, the Promised Land always had a dangerous catch. When we get to have everything else, we always forget the One we started with. In arriving and obtaining what was “promised”, it is easy to forget the Promiser. Like many of us today, the Israelites were stepping into a  lifestyle and culture of self-reliance, self-determination and self-sufficiency. Unlike life in the desert where they just had to wait for food to (literally) come down from heaven –  life in the Promised Land meant toiling for their everyday needs. Those nice stone houses? Someone has to build them. That bountiful harvest? Someone needs to plant seeds.  And their clothes – they must’ve just suddenly started to wear out.

God, having created the hearts of men, knew that when we have made our own way we are prone to forget him. Deuteronomy 8: 12-13 and 17 reads:

“…otherwise, when you have eaten and are satisfied, and have built good houses and lived in them, and when your herds and your flocks multiply, and your silver and gold multiply, and all that you have multiplies… you may say in your heart, ‘My power and the strength of my hand made me this wealth.’“

Congratulations. You’ve made it because of your hard work. You did it. You have arrived.

The problem is, food made by our own hands doesn’t satisfy for very long. Bread that the world offers will only make us happy for a moment. The latest phone, the latest car, a nice house, a large paycheck – each only satisfactory for a moment. When the moment passes, we want the next phone, next year’s car, a nicer house, a larger paycheck. This we could do for years until we have lived our entire lives for stuff and not for God.

When we attempt to feed our own selves, we are never satisfied. We could be surrounded by wealth and prosperity and yet remain hungry.

Let’s go to John 6. Here we find Jesus in the midst of the same crowd he had just miraculously fed with 5 loaves and two fish. They were hungry again so they’ve come to Jesus for more bread and fish. Jesus tells them:

Thousands of years later, the world remains hungry. All around us and maybe even within us, there is a hunger that can only be satisfied by the Bread of Life Himself.

We are not meant to be self-made or self-sufficient, we are meant to be God-sufficient. Living life like we’re in the wilderness, a life sustained daily by promises of God, is the only way to be satisfied. It doesn’t matter if you’re a 20-year-old struggling to make ends meet or a 50-year-old with a debt-free house and a healthy retirement fund. It doesn’t matter where in life you are or what you’ve accomplished for yourself. The depth of desperation or need that we feel is not the point. To trust God is the point. In whatever situation – in plenty and in want. We are not meant to live by bread alone, but by every word that comes out of the mouth of God.

You know what else? This Word became Flesh and dwelt among us. His name is Jesus. We need Jesus. Only Jesus can satisfy.

I am the living bread that came down out of heaven; if anyone eats of this bread, he will live forever; and the bread also which I will give for the life of the world is My flesh.

Jesus has given everything. While different people will have different views of what is promised them, I choose to claim that in Jesus, I have everything I have ever yearned for. No promise is greater than the Promised Savior. Everything else is extra. The world needs Jesus. All our addictions, our hurts, our brokenness, our imbalances – all these tragedies – are evidences of a world that is in desperate need of the Savior.

He is the Bread of Life. Let us partake of Him. Let us not hold back. Let us allow Jesus to work fully in us and through us. He is both Provider and Provision. We seek Him not because of what He can do for us or give us, but because He is, in Himself, the fulfillment of everything we could ever need. The Word became flesh.

He assures us that when we abide in Him – when we stand upon His will and upon His Word, we will bear fruit. We will remain like a tree planted by streams of water. Even in the middle of the wilderness, we thrive. We thrive in the hope that we will also be a blessing to others, so that their hunger might also be filled.

This life leaves us in discontent, whether we be in the wilderness or fertile land. If we are to be hungry, let us be hungry for more of Jesus. Only He can satisfy us. 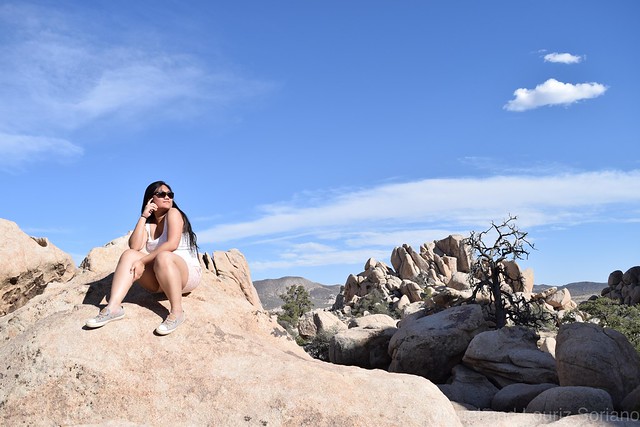 A portion of the above post is derived from a sermon written and given at Christ Chapel Full Gospel Assembly in May 2016.

Scripture quotations taken from the NASB.

All photographs taken by Miguel and Louriz Soriano. All rights reserved.